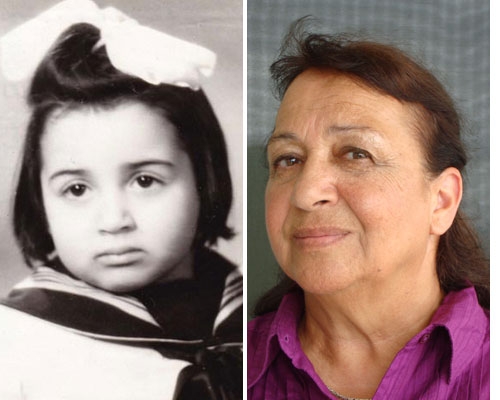 “Ah, that is me!” said Madeleine Modern when she discovered her photograph thanks to her nephew (her brother’s son) who is interested in genealogy research. She was very surprised and needed some time to understand how her photograph suddenly ended up on the Museum’s website. Then, a flow of questions arose, and she said she thought the Remember Me? project was excellent because it makes history alive again, but through children’s eyes. She added that this was a beautiful initiative that needs to be pursued.

Madeleine was about two years old when this photograph was taken, sometime in 1943. She believes that her older sister Sarah’s photo was taken the same day. Madeleine was too young to remember the war; she knows her family story mostly through what her mother and sister have told her.

Madeleine was born on June 11, 1941, in Paris at the Rothschilds’ Hospital in the 12tharrondissement. Her mother, Rojza Elfenbejm, was born in Nowy Dwór, Poland, and her father, Rudolf Modern, in Vienna, Austria. Madeleine’s parents met in Paris where they both lived as stateless. They had a small apartment on rue Oberkampf in the 11tharrondissement. Rojza was a housewife and Rudolf worked every job he could find to make a living. The whole family lived in poor conditions. At home, Madeleine’s parents spoke a mix of Yiddish and German.

During bombings in Paris, the family used to go down to the basement. The rumor was that French and German authorities did not arrest pregnant women, but that did not prevent the family from living in constant fear. According to Madeleine’s mother, the neighbors either helped them or at least did not denounce the family, who remained in Paris during the war.

Madeleine’s brother, Marcel, was born in November 1943. In early January 1944, French policemen and Germans came to arrest the Moderns. As her mother told her, she faced them and said that she had a newborn baby and would not follow them because it was cold outside and it was night time—rather, they should kill her on the spot! Just as courageously, her father told the police that he would follow them on the condition that they leave Madeleine and her mother at home and that they could come back for them the next morning. The police agreed. To this day, Madeleine does not know why they accepted her father’s demands. This was the last time Madeleine saw her father. He was 46 years old. He was deported on February 3, 1944, from the Drancy internment camp and was murdered at Auschwitz. Madeleine said that she was never able to mourn her father’s loss. The family spent the night after Madeleine’s father’s arrest hidden by the concierge, Mrs. Mercier. Then early the next morning, they went to the Comité Amelot to ask for help. Madeleine thinks that the Comité Amelot probably purchased the train tickets to send the Modern family to Normandy to hide at the home of a farmer whom Madeleine’s father knew. Sarah was already in Normandy.

Madeleine left with her mother and her baby brother for Angey in the Manche department. There, the Modern children used to call the farmer and his wife, the Soudés, grandpa and grandma. The Soudés knew they were hiding Jews, as did many in the village, but not a word was ever spoken about it. Madeleine describes this as a “conspiracy of silence,” but in the good sense. With the help of Mrs. Soudé, Madeleine’s mother was able to receive from City Hall an ID card with a false name; from that moment on, she was Raymonde Philippe. The Comité Amelot paid a stipend to the Soudésfor them to take care of the Modern family.

Madeleine’s sister recalls having a close-up view as the Allies started to liberate France; they watched the Germans leaving. After liberation, Madeleine’s mother worked in Paris. Madeleine and Marcel, who was one and a half years old, were sent to a Jewish boarding school that had opened its doors to war orphans, not too far away, in Brunoy, because their mother could not take care of three children by herself. Madeleine remained there until she turned six, and then went to another Jewish pension school in Mesnil-le-Roinear near Maison Laffitte. Marcel eventually joined her when he turned six. Both of them attended that school until they were 14 years old. Their mother visited them every three weeks, and sometimes Sarah accompanied her. Madeleine thinks that this institution was under the umbrella of the Bund because she never received any religious education there.

Madeleine does not recall much about this period, but she remembers that she and her brother were still victims of antisemitism. On the way from the dormitory to school, they were sometimes insulted as Jews by other kids. Madeleine recalls that she felt different from the other children at the village school. She said she felt as if she were coming from another planet because she did not fit in culturally. Also, she regrets that at the Jewish pension school nobody ever told them why they were staying there; this was a heavy burden for her. Looking back, Madeleine said that although they had music and dance classes, as well as Yiddish classes, she would have preferred more explanation, context, and feedback.

After she left Mesnil-le-Roi, Madeleine returned to live with her mother on rue des Couronnes in the 20th arrondissement. She went to a trade school until she left at 16 to start working. Because Madeleine’s mother did not speak French very well, her children always took care of the paperwork for every administrative procedure.

Madeleine was unhappy in Paris and no longer wanted to live there. Plus, she did not like the studies she had pursued. For these and other personal reasons, in early 1960 she moved to Geneva, Switzerland, where she took classes in film studies. She had always had a passion for film. After working as a script girl, Madeleine eventually became a film editor. She worked for many years in Swiss television. She has a vivid memory of her contribution to a news piece that probed Switzerland’s wartime role, entitled “Switzerland’s Lost Honor.” The program was very controversial in Switzerland.

Madeleine married and had two children, a son and a daughter. With her husband, Claude Schauli, she created a documentary film production company in Geneva, where she is still working. Together with her husband she is also very committed to several humanitarian causes and human rights issues, especially through the medium of documentary film.