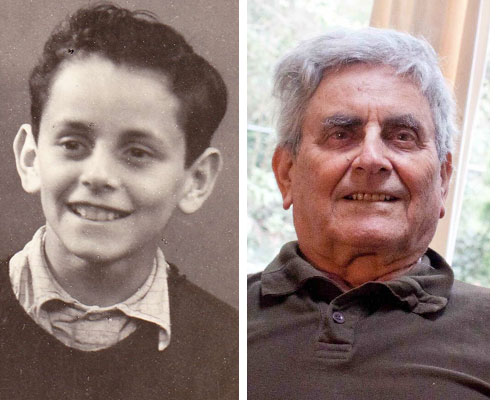 Albert Reingewirtz came across this photo some time ago when doing an Internet search for his name. The photo was taken after World War II at an orphanage run by the Oeuvre de Protection des Enfants Juifs (OPEJ), then located in Saint-Germain-en-Laye. He did not know at the time that the photos were being taken to show prospective adoptive parents. Had he known this, he says, "I would not have agreed to be photographed because I was waiting for my parents to return." Only years later did he learn his parents' fates.

Albert was born in 1934 in Besançon, Doubs, France, to Sarah and Nachman (Natan) Reingewirtz.His father was deported to Auschwitz on the first convoy to leave France in 1942. He lasted there only a few months. His mother was declared dead upon arrival in Auschwitz. Albert was himself arrested while staying with the Blum family. He was released because one of the family's daughters brought a note from a doctor saying that he was not healthy enough to travel. When the family learned that they were all to be arrested, they dispersed throughout France. Albert found himself in a Protestant orphanage in Les Cras, where he stayed until the end of the war. Also hidden there were two Jewish sisters from Belfort.

Albert is grateful to Captain Riom of the Salvation Army for his survival. Captain Riom encouraged Albert to remain faithful to his Jewish roots. She explained to him, "Jews are like a chain. All the links up to you held fast. Do you want to be the link that failed and broke the chain?" She convinced Albert to attend the inauguration of a synagogue where an elderly woman recognized him, exclaiming in Yiddish, "This is the Reingewirtzes’ son!" Based on this woman's information about other members of the Reingewirtz family, Captain Riom began searching for members of Albert's extended family. She was able to reunite Albert with some cousins.  Had Albert not gone to the synagogue with Captain Riom that day he may never have been reunited with any of his family members. Albert says, "I owe much to Captain Riom of the Salvation Army."

Albert's cousins sent him to an orphanage in Aix-les-Bains.  The orphanage was moved to Le Vésinet and then to Saint-Germain-en-Laye.  Rabbi Henri Soël was the director of the orphanage in Aix-les-Bains and Saint-Germain-en-Laye.  Albert tells us that the children clung to him like a parent until he left to assume a position in the United States.  Albert arrived in Israel aboard the Negba in 1950.  He first spent time at a youth camp operated by Aliyat Hanoar, a Jewish agency responsible for children and young people.  He then studied at Mikveh Israel, an agricultural school near Tel Aviv.  Albert now lives in the United States.

Albert does not mince words when describing the role played by the French in the persecution of Jews during the Holocaust: