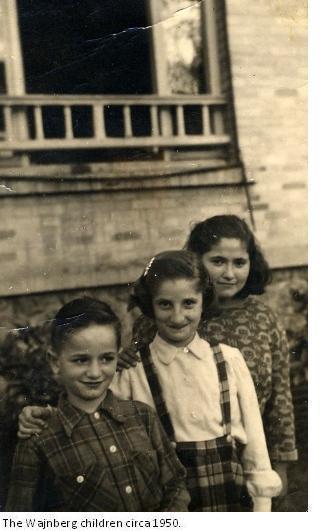 An article in her local newspaper led Liliane Wajnberg to the United States Holocaust Memorial Museum’s Remember Me? Web site, where she found photographs of herself, her older sister, Alice, and her younger brother, Simon. Although she recognized her own photo and had a copy of it, she had no idea where and when it had been taken. She alerted Simon, who had recently begun to research their early childhood in occupied France. They had just learned the Mémorial de la Shoah in Paris had some useful information about their childhood.

In the three months since Liliane and Simon identified themselves to the USHMM, they have learned many details about their early childhoods in France during and after the war. They discovered when, where, and why the Web site photos had been taken; they were reunited with another child survivor who had lived with them at a French orphanage after the war; and they learned the story of how the courageous villagers of a small farming community in Brittany had hidden them and 16 other Jewish children. Thanks to the efforts of the USHMM staff, they have also reconnected with the husband of their late sister, Alice, and learned about her life in Israel.

The Wajnberg children were born in Paris: Alice in 1934, Liliane in late 1938, and Simon in the summer of 1941. Their parents, Hersz Kalma Wajnberg and Chaja Parczew Wajnberg, emigrated from different towns in Poland and met in Paris, where they were married in 1930. Hersz was a tailor; Chaja, a seamstress.

On May 14, 1941, Hersz was arrested in the first roundup of 3,600 Jews in Paris. He was then 33. Chaja was six months pregnant with Simon at the time of her husband’s arrest. Hersz was interned at Beaune-la-Rolande until June 26, 1942, and deported to Auschwitz on Convoy 5 and killed shortly after his arrival.

Chaja managed to survive until her arrest on February 4, 1944. She was deported from Drancy on February 15, 1944, on Convoy 68 to Auschwitz where she presumably perished. She was 34 at the time.

How she managed to survive until early 1944 and care for her young children is not known, although her husband’s sister, the children’s aunt Rose, appears to have assisted her, narrowly escaping arrest herself.

Simon recently learned that he lived at two different Jewish centers in Paris from early 1943 until May 1944, but there is no record of the girls’ 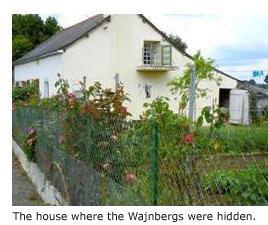 whereabouts during that time frame. These centers were run by the Union Générale des Israélites de France (UGIF) and did not provide a safe environment. In fact, two dozen or so of the Jewish children in the center on rue Lamarck were arrested and deported during the same time period Simon was there.

In the spring of 1944, apparently shortly after their mother’s arrest and deportation, the two girls were evacuated to a small farming community in eastern Brittany and hidden by one or more local families. Alice and Liliane arrived  there on March 24, 1944. A few months later, on May 19, Simon joined them, although it is not clear if all three children were in the same household. In all, 19 Jewish children, ranging in age from 2 to 14, were protected by 11 or 12 families in the neighboring communes of Saint-Christophe-des-Bois and Val d'Izé in eastern Brittany. 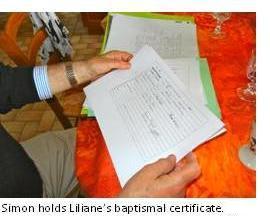 The three Wajnberg children, along with many of the other hidden children, were baptized in the local parish church on June 10, 1944, a few days after the June 6 D Day landing in Normandy. By August 4, 1944, the Allied forces had liberated the area of Brittany where the children were hidden. Liliane remembers the American soldiers marching by and throwing candy to the children.

Although Liliane has memories of being hidden on one or more farms, seeking shelter in the woods when the bombing started, and being raised as a Catholic during her years in hiding, Simon, who turned three that summer, has no memories of this time. According to her husband, Alice never talked about her experiences during the war years.

It was only with the publication of the photos on the United States Holocaust Memorial Museum’s Web site that Simon and Liliane learned about their time as hidden children. A retired French historian, Michel Godet, recognized Liliane’s name on the Web site and, through the USHMM staff, was put in contact with Simon, who coincidently was in Paris at the time. Mr. Godet, his wife, Danielle, and the mayor of Saint-Christophe-des-Bois and his wife, Jean and Nicole Pitois, hosted Simon and his wife for three days and arranged for them to tour the area, including the farmhouse where the three Wajnberg children apparently lived and the church where they were baptized. Simon and his wife also met with several local families who had firsthand memories of the war years and the hidden children. Simon was able to meet with the two sisters of the man who, at 18, had been Simon’s godfather. Mr. Godet has spent over 10 years researching the story of the hidden children of Saint-Christophe-des-Bois and Val d'Izé and has now located 18 of the 19 children. Their evacuation was orchestrated by Rachel Lifschitz of the Women’s International Zionist Organization (WIZO) and assisted by Madame Henry, a courageous local Catholic woman, who recruited the families and escorted the children by train from Paris. 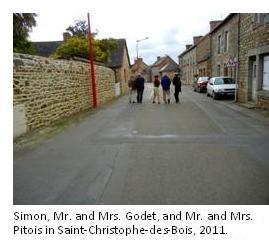 The date the Wajnberg children left Saint-Christophe-des-Bois is not known. Alice and Lilian were in school records there through April 1945 but by June of that year, they had left. There are also records that show they were sheltered at one point in a small village near Chartres.

By early 1946 the children’s names show up on the records of two orphanages in Malmaison, about ten miles from the center of Paris. The first, the Rinnah home, also known as Vieux Phare, was run by Youth Aliyah and financially supported by the World Jewish Congress. Based on Simon’s research at the Jacob Rader Marcus Center in Cincinnati, it is likely the photos of the three Wajnberg children on the Remember Me? site were taken while they were at the Rinnah home and were part of a program sponsored by the WJC to find “foster” parents in the United States and elsewhere to pledge $300 a year to sponsor a child. Liliane remembers receiving letters and care packages from an American family.

At some point after the liberation, the children’s aunt Rose became involved in arranging for their care. She herself was in poor health and did not have the financial resources to care for them, but she was appointed their legal guardian in 1947. In September 1946 the three children were transferred to another orphanage in Malmaison, this one run by Oeuvre de Protection des Enfants Juifs (OPEJ).

Recently Simon and Liliane had the opportunity to meet with another child survivor, Bernard Goldberg, who had been their contemporary at the OPEJ home and who was able to answer many questions about life there in the postwar years. Bernard’s older brother, Henri, is one of the children featured on the Remember Me? Web site.

Alice was transferred in and out of several different facilities during this time frame, but Simon and Liliane remained at the OPEJ home in Malmaison until mid-1950 when they came to the United States. Simon was then almost 8 and Liliane 11 and a half. While their aunt found an American couple willing to take the two younger children, Alice remained behind in France until the mid-1950s when she immigrated to Israel.

While living in an orphanage in France, Alice met Emil, who had immigrated to France from Morocco after the war. Emil worked at a bakery and met Alice in 1950 when he was bringing sweets to the children at the orphanage. The next year, Emil left for Israel. Alice followed him in 1955 and they married at Kibbutz Yif’at. They left shortly thereafter for Kibbutz Gezer and then Nir Akivah. In 1962, they settled in Sderot, where Emil lives to this day. Alice worked in a factory producing food. She and Emil had four children, and there are now eight grandchildren and three great-grandchildren. Alice died in 2004 at the age of 68. She had told her husband very little about her parents and her life during the war.

Simon and Liliane grew up in the D.C. area. The adjustment to their new life was difficult for both them and their adoptive parents. They only saw their aunt one more time and lost touch with their sister after their aunt’s death in the mid-1980s. Simon and Liliane both received college degrees and went on to lead productive lives. Liliane, now retired, lives nearby her three grown children and four grandchildren. Simon and his wife are also retired and live in a different part of the country, but they are very close to Liliane and her family.

Simon and Liliane would like to thank the USHMM for the Remember Me? project, which led to their reconnection with their brother-in-law and the discovery of the story of their lives as hidden children in Brittany in the final year of the war in France. They would also like to thank the Jacob Rader Marcus Center of the American Jewish Archives in Cincinnati (who supplied the majority of the photographs used on the Web site, and whose staff assisted Simon in researching the archives of the Child Care Division of the World Jewish Congress) and the Mémorial de la Shoah in Paris for compiling other records for them and assisting with translation during the reunion with Bernard Goldberg. They also thank historian Michel Godet for his tireless research into the story of the hidden children of Saint-Christophe-des-Bois and Val d'Izé and his wife, Danielle, and the mayor of Saint-Christophe-des-Bois, Jean Pitois, and his wife, Nicole, for their assistance in arranging Simon’s visit to the community that sheltered him, his sisters, and the other hidden children.