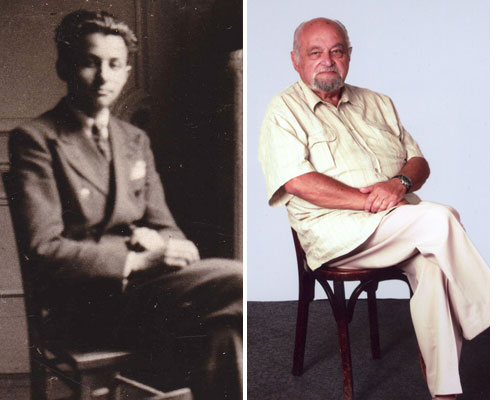 Arnold Racine did not remember this photograph. His first comment was that he was surprised to see it, but he added, “It was taken more than 60 years ago; at that time, I was able to run faster than nowadays!”

Arnold was born on June 15, 1930, in the 12th arrondissement of Paris. His mother, Frida (née Pessine) Racine, was born on February 15, 1904, in Velikiye Luki, Russia. His father, Noël Racine, was born on October 5, 1897, in Ukraine. He was in the Russian Army in 1917 and ended up interned in France after the Bolshevik Revolution in 1917. Noël’s 14 brothers and sisters remained in Ukraine.

Arnold’s parents were married in 1929 in Paris and lived at 3 rue Lucien Guitry in the 20th arrondissement. Arnold’s family was liberal and not religious. His paternal grandfather was a member of the Bund. Noël Racine worked as a gem salesman, and Arnold’s mother was a housewife.

Arnold went to school at 30 rue de la Plaine in the 20th arrondissement. In 1943, Arnold’s grandparents and his mother were arrested (probably during the roundup of the elderly). At that time, Arnold was at a school where three Jewish boys wore the Star of David. When the Miliciens (members of a paramilitary force established by the Vichy regime) came to the school, Arnold’s teacher hid the three boys in his school-provided apartment and said that the police had taken the Jewish children 30 minutes earlier. Arnold and the two other boys remained in the apartment over night. The next day, Arnold’s father came to the school to pick up his son and take him to the Loiret, where Arnold stayed with a baker, Mr. Cotté, who happened to be in the Resistance. Arnold’s father went back to Paris and was denounced by the concierge who called the Gestapo. He was arrested, sent to Drancy before his deportation to Auschwitz  (Convoy 76 on June 30, 1944), and murdered.

Arnold remained with the Cotté family and went to school, where he was in the same classroom as the family’s son. Later, the family sent Arnold to stay with a farmer in Quarré-les-Tombes in Yonne. Arnold compares the farmer to the French classic movie Le Vieil Homme et l’Enfant (The Two of Us) made in 1966 in which an old farmer (played by Michel Simon) who supports the Maréchal Pétain hides a little Jewish boy without having any idea about what being Jewish means. Arnold remembers that there was a big portrait of the Maréchal Pétain in the farmer’s house, and the farmer used to say: “le vieux, il désenjuive la France” (“the old man, he is ‘de-jewifying’ France”). His wife used to advise him to be careful because of Arnold’s presence. To this, the farmer answered: “Him, nobody will touch him, he is my grandson!”

Arnold remained eight days with this couple without going to school. Then, Arnold ended up in a resistance group near the Lac des Settons in Nièvre. His first encounter with the American liberators was with a short red-haired soldier who spoke Yiddish. Arnold said he was stunned that Americans spoke Yiddish. The soldier’s captain also spoke Yiddish and a little bit of French. Arnold traveled to Paris with them. The U.S. soldier told Arnold that he would have to continue his journey to Berlin, but when he came back, if Arnold did not have any family who survived, he would adopt him. This soldier did not have children and lived in Brooklyn. He also put Arnold in contact with the Joint Distribution Committee in Paris. Arnold found one of his aunts, Mathilde (his mother’s sister). During the war, Mathilde worked for the store chain Monoprix and Gallery Lafayette. The store was “Aryanized” and fell under a non-Jewish owner who protected her because she knew her job very well.

The Joint Distribution Committee instructed Arnold to go to the Hôtel Lutétia, where he checked the photographs on the wall every day for a month. There, Arnold met a Pole who spoke several languages and who escaped from a camp and fought with partisans. He told Arnold that he should not have too much hope regarding his family and that from that day on, he should think about fighting to defend the Jews in Palestine. He was a member of the Stern Group.  Arnold indeed went to Palestine where he joined the “Dut 75” (Unit 75 in Hebrew), which was composed of French, Belgian, and Canadian Jews. A hundred and sixty men were in that unit, and all were French speakers. Arnold fought during the Negev campaign, in Beersheba, and in other locations in the south. After the War of Independence in 1948, Arnold spent a year in Kibbutz Mesilot near Afula where he worked.

In 1952 or 1953, Arnold returned to France, worked as a bookkeeper, and attended night classes to study accounting. He married and had three children; he now has four grandchildren and one great-grandchild.

Arnold wanted Mr. Cotté to be honored as Righteous Among the Nations. After the war, Arnold met him in Ivry, where he was still a baker. His response to Arnold’s suggestion was: “Don’t talk nonsense.”