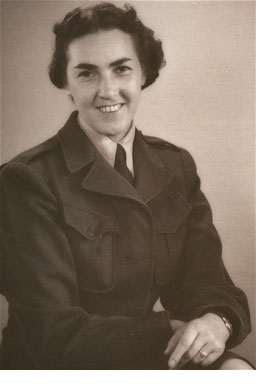 Greta Fischer, a refugee from Czechoslovakia who returned to Germany after World War II, is the source of 127 photographs of displaced children from Kloster Indersdorf in the Museum’s collection.

In June 1945, she arrived in the Munich suburbs as a member of the United Nations Relief and Rehabilitation Administration (UNRRA) team to study and work with lost, separated, or unaccompanied children. The UNRRA was created during the war at a 44-nation conference to repatriate and assist the refugees who would come under Allied control.

With the aid of the American Army, the UNRRA team secured an abandoned cloister, Kloster Indersdorf, to serve as a center for displaced children. A local order of Catholic nuns, who had operated an orphanage at the cloister in the interwar period, also provided assistance in setting up the center.

Once established, Kloster Indersdorf maintained a population of some 350 children, representing over 20 nationalities. Many of the children had been kidnapped by the Nazis from their homes in eastern Europe and brought to the Reich for Aryanization or forced labor. Most of the Jewish boys at the center were concentration camp survivors, particularly from Flossenbürg.

In addition to providing basic care and social rehabilitation for the children, Fischer and the other UNRRA team members helped to trace their identities and arrange for their adoption, return to their homelands, or emigration to new countries of settlement. They published photos of the children in newspapers to help locate family members.

In 1948, Fischer left the center to accompany a group of children from Marseille, France, to Toronto, Canada. She subsequently worked in Montreal as a social worker and died in Israel. Her niece, Lilo Plaschkes, gave Fischer’s collection of materials from Kloster Indersdorf to the Museum in 1992.