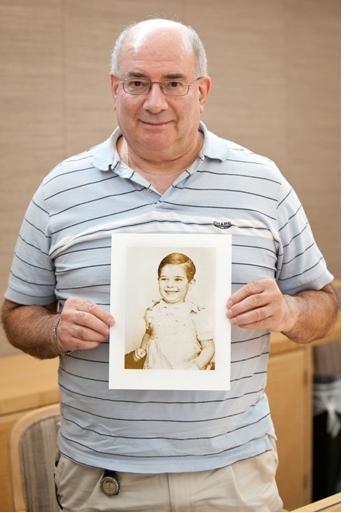 Until a staff member from the Museum’s Holocaust Survivors and Victims Resource Center called Bernard Icore, he had not seen his picture on the Remember Me? Web site. Once directed to it, he was excited to recognize himself and his sister, Georgette.

Bernard was born on August 2, 1941, in Neuilly-sur-Seine near Paris to Isabel Gottlieb Ickowicz and Ben Zion Ickowicz, who had come from Latvia and Poland respectively to Paris where they met and married in 1936.

Before Bernard was born, his father was deported to Drancy, and he perished at Auschwitz in 1942. Bernard does not remember much from the wartime period because he was so young, but he knows that he was hidden with his mother in Paris early on, and that later, he and his sister were in hiding at the home of a Christian family in Vitry-sur-Seine. Their mother came to visit on weekends but during the week, she was in hiding in Paris with little or no food. His sister remembers these facts. A friend of Bernard’s sister recently tried to find members of the family who hid them but was not successful.

Bernard, his sister, and their mother remained in Paris after the war. He attended public school and later, when he was a teenager, was in a boarding school near Paris. He went to Hebrew school and had a bar mitzvah at a synagogue where they lived just outside of Paris.

When his sister moved to Israel in 1959, Bernard traveled to Buenos Aires and lived there for three and a half years. A cousin of their father lived in Argentina, and his mother persuaded him to go there for a year after he graduated from high school. He stayed longer, first working in the cousin’s factory for two years. He was later employed as a technician in an automobile factory. Bernard met his wife-to-be, the daughter of survivors, in Argentina, and in 1964 he immigrated via France to the United States.

Bernard was married in 1965 and was drafted into the U.S. Army in 1967 during the Vietnam War. He was in the army for three years and then returned to school and graduated with a degree in mechanical engineering from the University of Maryland. For most of his career until his recent retirement, Bernard worked for Westinghouse/Northrop Grumman in Baltimore.

Bernard and his wife have four sons, two of whom are twins, and eight grandchildren.

Bernard’s mother lived all her life in Paris but visited them twice in Baltimore. When he was in the army Bernard was stationed in Germany and was able to visit his mother often. He is in touch on a regular basis with his sister Georgette, known as Choucas in Israel, who lives in Kibbutz Hasolelim.