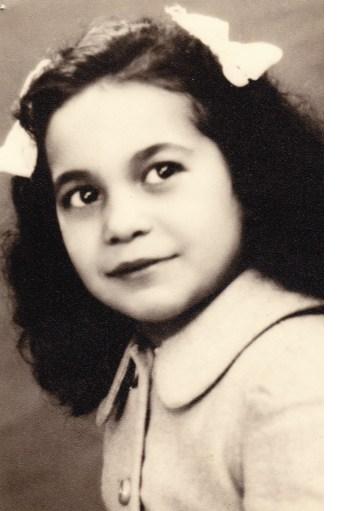 Betty Levy was born Berthe Camhi in 1937 in Marseille, France. Betty’s mother, Lea (née Alian) Camhi, had gone to Marseille from Turkey in the early 1930s. She married and had a son. Tragically, her first husband died in a work-related accident, and she also lost her child. Lea met Betty’s father, Salomon Camhi, through mutual friends, and they married in 1936. Salomon was originally from Salonika, and he, too, had been married once before and had two daughters.

Betty’s family was denounced during the great roundup in Marseille in 1943. She remembers waking to the sound of two French policemen bursting into her house and taking her father away. She can still see the despair on his face. He and Betty’s two half-sisters were taken to Drancy. Her sisters were lucky: They had renewed the stamp from the Turkish consulate on their identity papers in time. This enabled them to leave Drancy. Her father, however, had not renewed his permit papers. He was deported and murdered at Auschwitz. Betty was left alone with her mother in Marseille.There were opportunities to hide Betty with different families, but Lea had already lost a child, so she chose to keep Betty by her side. Betty’s half-sisters returned to Marseille and were reunited with their family. The four women left the city to seek refuge in the Maquis. They found safety in Ardèche, where they stayed until liberation.

After the war, Lea married an old friend, Daniel Levy, who had survived Auschwitz. Daniel’s family had also been denounced and deported. His wife and two of his three children had perished during the war. Jacques was the only surviving child;he had had the good fortune of leaving home early on the day that his family was rounded up. At liberation, when Betty was only eight years old, Jacques left France to fight in the Israeli War of Independence and stayed in Israel for a decade. Jacques ended up returning to Europe, and he and Betty fell in love and got married. They had two daughters, five grandchildren, and one great-grandchild. Jacques worked in business while Betty looked after their home. They are now retired and living in Israel.