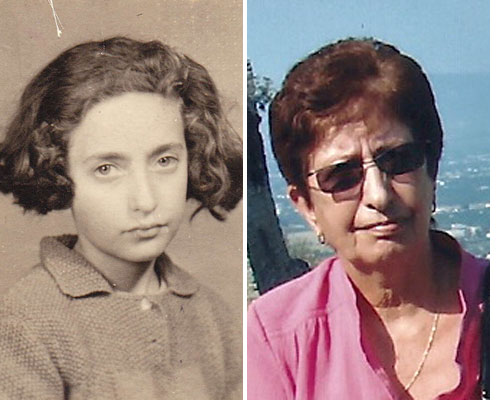 Bracha Aris read about the Remember Me? project in a recent newsletter of Aloumim, an organization to which she belongs of children who were hidden in France during the war. She and her family were excited and shocked to see her picture. She does not remember when the photograph was taken.

Bracha was born Berthe Moskowicz in Paris in 1937. Her parents, Chana Moskowicz and Noah Flambaum, had met in France, where they had both immigrated during the 1920s. Because they were not French citizens, they were married by a rabbi in 1929 and she was given her mother’s maiden name.

Bracha was an only child. She has very few memories of her father, who was taken to Pithiviers in 1941and deported to Auschwitz on June 25, 1942. He died on July 21, 1942. She remembers once sitting on her father’s knee and eating an egg with him. Bracha’s father and uncle, Abraham, were tailors who worked at home making trench coats. She remembers six sewing machines in the apartment. After the war she had some contact with two surviving cousins on her father’s side.

Bracha knows very little about her mother’s fate. She was deported to Auschwitz on Convoy 11 on July 27, 1942, but there the trail ends. Bracha remembers her mother packing a suitcase and taking her down to the concierge to await being picked up. Two French policemen and a German officer came for them. The German told her mother to leave the girl with the concierge, and Bracha considers him her savior.

After a few days with the concierge, Bracha was sent to an orphanage and from there she was taken to a railroad station. Mademoiselle Mathieu, whom Yad Vashem recently honored as a Righteous Among the Nations, took her on a train, and she was told not to speak of anything that had happened to her. There were many German soldiers on the train. Although she was only five years old, she remembers it all very well. When she reached the train station at Nantes, a man with a horse and buggy took her to a small village near Chavagne-en-Paillers. The Piveteau family cared for Bracha for two years. They were farmers and, though not a very warm family, they treated her well. She attended school and helped on the farm churning butter by hand and taking their six cows to pasture. Bracha was baptized and attended church regularly with the family. She knew the prayers and continued to cross herself even after the war. At first she did not want to leave the family. In 2000, she visited one of the family’s sons, who had inherited the family farm.

There were 35 other Jewish children hidden in that cluster of small villages. Bracha now knows that it was the Women’s International Zionist Organization (WIZO) working with the French underground that placed her and the other children with families. In 2003 in Netanya, Bracha met Rachel Lifschitz, who had worked with WIZO during the war. She was the person who placed her and many other orphans. That same year, there was a search for the 36 orphans who had been in hiding in the same area as she. About 22 of the children attended a reunion, and a sign expressing appreciation for the local people who saved these children was placed in a town hall. It was at this time that Bracha began telling her family about her childhood during the war.

After the war, Bracha was taken to a children’s home at a villa in Malmaison organized by Oeuvre de Protection des Enfants Juifs (OPEJ). She stayed there until 1948. In November of that year, she arrived in Israel. She was placed in the youth village of Ein Karem, near Jerusalem, which had been established by Rachel Yanait Ben-Zvi, the wife of Israel’s second president. Mania Shohat was the village’s librarian. She inspired in Bracha a love of books, and Bracha later became a librarian and worked at the Ashkelon public library for 35 years. Bracha was in Chevrah B, which included orphaned children from Europe. After she completed the eighth grade in 1952, she was sent to Kibbutz Dovrat near Afula for high school.

In 1954 Bracha was conscripted into the Israel Defense Forces and joined the Nahal for two years. She married in 1958 and with her husband moved to Ashkelon to work as a youth counselor. She has lived there ever since. She has three children and eight grandchildren and has been a widow for three years.