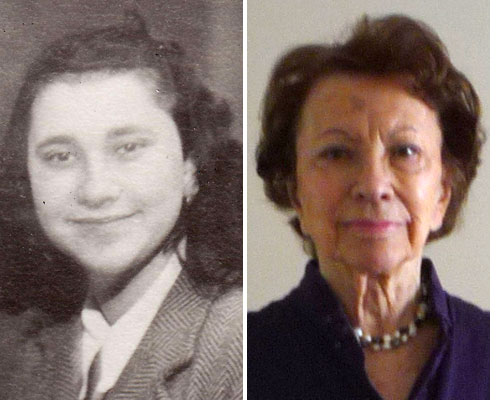 When Betty Freund saw her picture on our Web site, she was surprised and had no recollection of the photograph.

Betty was born on August 29, 1929, in Merlebach, Lorraine. Her sister, Erna, was born on July 18, 1927, also in Merlebach. Their parents had come to France in the early 1920s from Galicia and spoke German and Yiddish. Betty’s mother died in a psychiatric hospital during the war. The last time Betty saw her was in 1938.

After the war started, Betty’s father was very prescient about the trouble to come and took the family to Valenciennes in the north of France to stay with a sister of Betty’s mother. Before the French debacle and the exodus of 1940, Betty’s father decided to drive south to Limoges, where they rented a house near a synagogue. Betty remembers that Limoges was a nice city where many Jews found refuge and continued having a Jewish cultural and social life.

In 1942, Betty’s father was arrested. Betty and Erna were sent to a children’s home in Beaulieu, probably a home run by the Eclaireurs Israélites de France (EIF). Erna was then sent to Chateauroux to learn how to keep house. Betty went to stay with her aunt and uncle (a brother of Betty’s father) who had no children. They lived in Limoges hidden in the house of an old woman to whom they paid rent. They remained there until the liberation, when they returned to Valenciennes.

After the war, Betty’s sister moved to Marseilles where she married and then left for Israel. Betty visited her sister while in Marseilles, hoping to stay with her, but then returned to Valenciennes and married a young man. In 1958, they moved to Paris where Betty helped her husband with a shop.

They had two children and she now has two grandchildren.