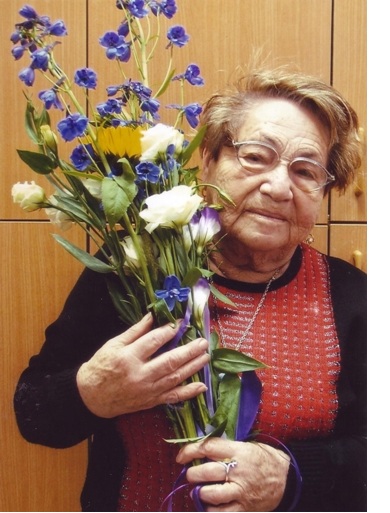 Bronia Wiener was born Braindla Bronka Najmark on December 10, 1932, in Warsaw, to Leib and Malka (née Wald). Her younger brother Israel was born in 1936. The family was quite well to do. They were enjoying a relaxing summer in Legionowo, away from the big city, when Warsaw was occupied and as a result they could not return home. For some time they managed to get by, even without all their belongings in Warsaw. The children helped look for food and smuggled it into the ghetto in Legionowo to which the family was moved, bartering for what they needed for as long as that was possible. At one point, Bronia was arrested in Warsaw and did not return to Legionowo for a whole week. She spent time in the Pawiak Prison (during which time her mother was beside herself with worry) but miraculously managed to escape. Under very difficult conditions, while the family was living in a small room and had insufficient food, her brother Abraham was born. As their situation worsened, Bronia’s father, Leib, tried to return to Warsaw to bring some valuables so that they could survive in the ghetto. They waited for him anxiously but he never returned. They never found out what happened to him.

There was a rumor that the ghetto would be evacuated, so Bronia’s mother escaped with her children. They tried to hide but a German murdered Malka and baby Abraham in the woods as Israel watched from a distance. Bronia and Israel were then on the run in the desperate conditions of the Polish countryside near Legionowo. Eventually Bronia had to bring food to Israel who could not move from his hiding place because his toes froze. Bronia was taken in by a kind Catholic family under the condition that she convert. She did and lived with the family until the end of the war. She kept in touch with them for a period after the war, but when she later wanted the family to be recognized as Righteous Among the Nations by Yad Vashem, she could not locate them. The mother had died and she heard that the two daughters immigrated to the United States.

After the war, Bronia and Israel lived in the Otwock orphanage for five years. Later, in Israel, they kept in touch with the group that lived there and attended meetings and reunions. In August 1950, Bronia and Israel came on the ship Kedma to Israel after an uncle asked that they be sent from Poland. Bronia spent time in Kibbutz Gan Shmuel and then Kibbutz Har’el. In 1955 she married Benjamin Wiener, a Holocaust survivor from Lodz, and they lived in Givatayim. Bronia had two sons and four grandchildren. Her husband died in 1973. Bronia retired after working for a supermarket chain for 21 years. She died in March 2012 after battling cancer. Her brother Israel’s Hebrew memoir, Back to the Unforgotten Past, published in 2011, was an important source of information for many missing pieces of Bronia’s life story because the interview with her was short due to her illness.

Bronia’s brother Israel shared with us his touching eulogy for his sister:

“My sister, Bronka, and I were blessed with a happy childhood which, alas, lasted only a short time. When I was a youngster not even six years old, my parents and brother were murdered. Since then I held on to my sister, who was older than I, and together we paved our ways through tormented paths. We played hide and seek with death and were rewarded with life. At the end of the war we found a warm home at the children’s home in Otwock, a place where our humanity was returned to us. There, too, my sister worried about me. After five years there, we came to Israel hoping to be united with a loving, embracing family. Before long we were disappointed and eventually found ourselves living on a kibbutz. While I was busy trying to get on track with my studies, my sister was working most of the day and she could devote only a short time to studying the Hebrew language.

Life was not kind to her even when she raised a family with a Holocaust survivor husband (who had been in Auschwitz). She was always in difficult economic straits. The handicap which she had since birth added another difficulty to her life. At first she lived in a basement apartment that flooded one winter destroying all its contents, including the photographs we had from the Otwock children’s home. Later, she moved to a fourth floor studio apartment. Even when she had an infant to care for, she did not hesitate to make room for me so that I could pursue my university studies. Later she moved to a two-bedroom apartment outside Tel Aviv. There, her second son was born. I continued to live with her until I started a family of my own.

At the age of 49, Bronka’s husband died. I tried to be of help to her in raising her teenage sons. When they had their own families and left the family nest, she became very lonely. In order to help her we decided that she would come to my house every Friday night. I, of course, visited her regularly. Her sons sometimes were late or did not come at all. So when I was alone with my sister I tried to divert her attention from everyday worries. When her mood was better, we would sail in time to our childhood home, remembering a song our mother used to sing to us even in difficult times in the ghetto. In spite of the lapsed time, the words were indelibly marked in our memory and so we would start singing with pure happiness. The song was the theme of a Polish film from 1937—a love song that became very popular among Polish ladies. It also became our secret song.

Last year my sister fell ill with cancer. Every day I visited her and helped as much as I could. As time passed, her body gradually gave in to the disease and she struggled for her life for the second time. The first time she was just eight years old.

When I returned home from one of my daily visits, her childhood friend, Yehudit, called. She suggested that I look at the Remember Me? page on the United States Holocaust Memorial Museum’s website because perhaps there were photographs of children from Otwock. To my great surprise, I found a photograph of my sister, who had not yet been identified. I immediately sent a message to the Museum and that is when my contact with Michlean Amir began. She promised to send a good copy of the photograph and my sister waited for it anxiously.

But her health deteriorated and she was placed under hospice care. Her contact with us faded gradually. When she took her last breath and closed her eyes, I kissed her forehead and sang to her our secret song. That is how I parted from her life to which I had clung ever since my parents and brother were murdered.

The photograph arrived while we were sitting Shiva and we displayed it in the center of our home.

During the unveiling I brought the framed picture and with it told my sister’s story. I also sang the song that we loved and thought that perhaps it rose to the gates of heaven.

Now my sister’s picture hangs above my head in my study and every once in a while I sing our song for her and stare at her image in the photograph.”