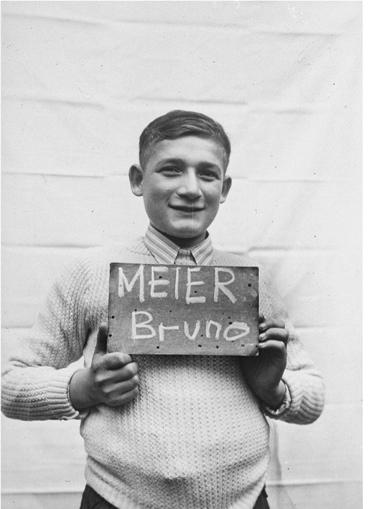 Bernard Meier and his wife, Fran, have seen this photo of Bernard’s father, Bruno, before. They first learned of its existence when Fran’s brother found it about six to eight years ago. Bruno died of an aneurysm in July 1955. Bernard’s mother, Sylvia, would occasionally speak of her late husband, but it was often too painful for her. Bernard and Fran have done some research on Bruno’s life and spoke with us about what they know.

Born in Gambach, Germany, in 1928 or 1929, Bruno Meier was one of three children. His parents later divorced, and his father immigrated to the United States. Bruno’s mother, Elsa, is believed to have perished in Izbica. His sisters Paula and Renate were sent with him to Theresienstadt in 1942. They were then sent to Auschwitz, where the girls were killed. In January 1945, as the Soviets were advancing, Bruno was among a large number of prisoners transferred to Mauthausen in Austria. There he remained to recuperate from illness after liberation.

After the war, Bruno eventually made his way to Kloster Indersdorf, where this photo was taken. He knew his father was still living, but he did not know where he was or how to reach him. On October 31, 1945, he was part of a group of boys who were sent to England from Kloster Indersdorf. He worked there as a butcher and met his wife, Sylvia, at a dance. His best man at their wedding had been one of his fellow prisoners at Mauthausen. Bruno and Sylvia had a daughter, Maureen, and Sylvia was pregnant with their son, Bernard, when Bruno died. Bruno is remembered as a kind man who worked hard to create a new life for himself after losing so much.

Bernard and Fran have lived in the United States for 27 years. Several years ago, knowing very little about Bruno, they undertook a search to see what they could learn. They visited the cemetery in England where he was buried and travelled to his birthplace in Germany. They report that the town historians in Gambach were very helpful as they worked to learn what they could about Bruno and his family. It is important to them that their children understand who their grandfather was and what he experienced during the Holocaust.

In the course of their research, Bernard and Fran learned that Bruno’s father, Bernhard, died in Florida in the 1990s. They found out that he had established a new family and had a son after he came to the United States. They would welcome hearing from any survivors who might remember Bruno and might be able to tell them more about him.