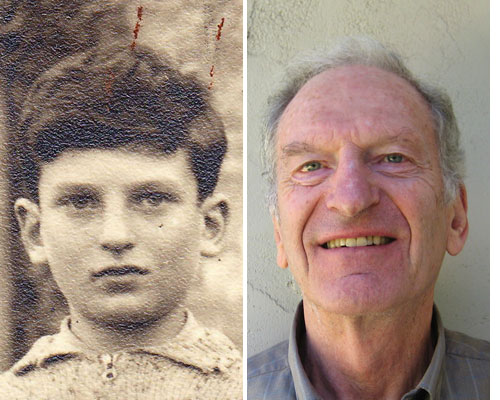 Camille Silberman was born in Brussels in 1936. In 1942, when Camille was around five or six years old, his parents placed him and his sister in a Protestant orphanage in nearby Uccle. They had been there for less than a year when the orphanage told its Jewish charges that they had to leave. Through a friend in the underground, his parents contacted Father Bruno Reynders, who is now famous for having rescued more than 300 Jewish children in Belgium during the Holocaust. Father Bruno placed the two Silberman children in a convent in Bruges, where they stayed for the next two years. Camille was hidden under the name Camille Stevens.

In the meantime, Camille’s parents had made their way to Italy. They were in Rome in 1944 when the Americans liberated the city. The Americans took them along with 980 others to a refugee camp in Oswego, New York. The refugees had to agree to return to Europe at the end of the war. In early 1946, though, President Truman ordered that the refugees be allowed to stay.

Because Camille and his sister could not join their parents in the refugee camp immediately after the war, they spent a year in a Jewish orphanage in Lasne, near Brussels. He thinks the picture of him was taken there. Most of the other children in the orphanage lost their parents in the Holocaust. In September 1946, a young woman sailing to Argentina accompanied the Silberman children as they sailed for New York from Marseilles aboard the Athos II. When their parents met them in New York, after a four-year separation, they did not recognize one another.

The family lived in Manhattan until 1948, when they moved to the Bronx. While a teenager, Camille changed his name to Charles Stevens. He graduated from New York University, where he studied engineering, and then earned a doctorate in nuclear engineering at the University of Michigan, where he met his wife, Barbara. After living for three years in Pittsburgh, he and his family moved to San Diego in 1964, and then to Palo Alto in 1974. His career was at Westinghouse Electric, General Atomic, SAIC, and Lockheed.

Charles and Barbara recently celebrated their 50th wedding anniversary. They have two daughters and four grandchildren. Their oldest grandchild is graduating from college this year.

For many years, Charles found it difficult to talk about his experiences. For the past ten years, though, he has worked with the Northern California Holocaust Center, as well as the Jewish Family and Children’s Services, and has spoken to high school students about his memories of the war years. He is a member of the Bay Area Hidden Children group and Congregation Beth Am in Los Altos. He would love to learn what became of other children who were at the orphanage in Lasne after the war.