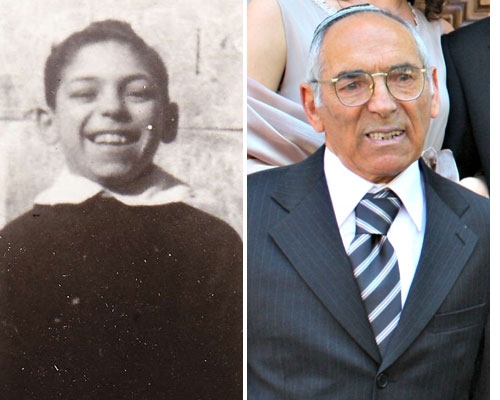 Giacomo Di Veroli (pictured here) remembers this photograph well. It was taken in the Franca Muggia home, which welcomed displaced and orphaned children after the war. Giacomo has good memories of the years he spent there, and only nice words for the teachers and educators. His brother Cesare and his cousin Mosé were his closest friends, but he remembers that all the children were very kind and they became like a family to him.

Giacomo was born in Rome in 1935. He was the eighth of ten children born to Donato and Letizia Di Veroli. Cesare was born a couple of years later. The family was not wealthy and was unable to flee Rome to find asylum elsewhere during the war. When the Germans occupied Italy, many Jews left Rome to seek refuge in the countryside or went into hiding. Donato had no place to hide his large family, so they stayed in the old ghetto and he went daily to the Porta Portese market where he had a clothing stand.

The older siblings were not with them; Mosé and Rosa had already married and moved away from home. And David (19) and Leone (16) were not home.

Letizia decided to go and warn her son Mosé that the Germans were in the ghetto. She took little Bruno with her. When she came back, she found the house empty.

She soon discovered that her sister had hidden Fiorina, Giacomo, and Cesare in her rag store, but Giuditta and Celeste, together with their father and grandfather, had been arrested. Two days later, they were deported to Auschwitz, where Giuditta, Celeste, and their grandfather were killed upon arrival. Donato died months later.

Letizia went into hiding with the four younger children, while David and Leone tried to escape on their own. David fled Rome, but he was arrested in Florence in December. He was imprisoned in the Fossoli transit camp until May 1944, when he was deported to Auschwitz. He survived the camp and the death marches and was liberated in Dachau. He never talked about his experience, and when he was in his 70s, he did "as Primo Levi did," in Giacomo's words. He committed suicide.

Leone managed to hide until May 1944, when he was arrested in Rome. Fifteen days later he was deported to Auschwitz, incidentally on the same convoy as his brother David.  Leone was liberated in Bergen-Belsen.

Having this experience together created a bond between the brothers that would last their whole life. Years later, Giacomo, Cesare, their cousin Mosé, and others would spend their free time together, pooling the little money they had so that nobody would be left out from a drink or a ball.

Giacomo left the orphanage to start working. He helped at the Porta Portese stalls and even was a "sciusciá" at Piazza Venezia: He would ask American tourists if they wanted their "shoes shined," as in the 1947 movie by Vittorio De Sica.

Starting as a salesclerk, he managed to build his own business in wholesale clothing. He has been happily married for 50 years and has two sons.

He and Cesare have many things in common: they were business partners for a while, they married in the same year, and Cesare has two sons as well.