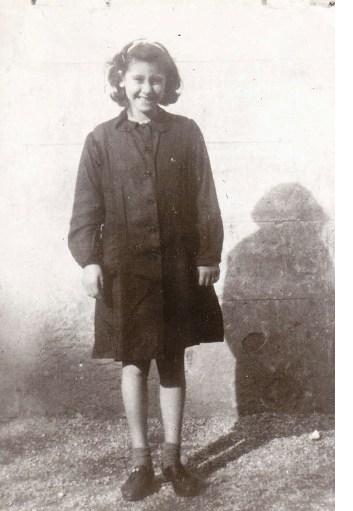 Enrica Amati was born in Rome on September 18, 1935. In this picture, she is about ten years old. She has no recollection of the photo being taken and would very much like to know where it was taken and by whom. She first saw the photograph when a friend showed it to her and couldn’t understand where it came from or how it came to be in the Museum’s possession. She felt a deep anguish because it brought back memories of a very painful period of her life.

When told that many of these pictures were taken in institutions where families and children had found assistance and help, Enrica said repeatedly that nobody had helped her family after the war. Her mother was then 26 years old, a widow with three children, and their life together after liberation was extremely challenging. Her mother was battling depression. Enrica started going to school again after the Americans liberated Rome, but she had to quit soon after because she fell seriously ill, in part due to malnutrition and also due to the pain of having lost her grandparents and her father, who had all been deported. She was ill for more than two years.

Enrica spent her first six years of life in a little town close to Rome, Genzano. The racial laws meant she could not attend public school, so when she was six she moved to Rome to attend the Jewish school. She lived with her grandparents at first and later her mother and the rest of the family moved in, too. Enrica’s grandparents were captured during the October 16, 1944, roundup of the ghetto in Rome and were sent to Auschwitz. “That is when my first life ended, ” Enrica tells us. “Nothing was the same afterward.”

After the capture of Enrica’s grandparents, the whole family went into hiding, first in a friend’s house and later in a convent. In February, Enrica’s father was captured, too. At first, they were able to get letters from him from Regina Coeli, the main prison in Rome, and then from the camp in Fossoli. After that, they never heard from her father again. Enrica believes that her grandparents and her father died in Auschwitz. She was able to find her father’s index card in Auschwitz, when she went there, which said that he was transferred three days before the Soviets army liberated the camp; she does not know what happened after that. She knows that her grandparents also were in Auschwitz and, strikingly, she recognized her grandfather in a documentary taken right after liberation: He was filmed standing behind the barbed wire. She has not been able to actually find out what happened after that. The Italian State TV company, RAI, gave her family the footage and even invited them to their studio to view it with some experts. Enrica was later interviewed by the Shoah Foundation, a testimony she recalls as “Mr. Spielberg’s project.”

Of her life in the convent, which lasted about nine months, Enrica remembers that there were many families hidden there and they were all living in a big room. At first, she would still go out into the city, but after her father—who was hiding somewhere else, as men were not allowed inside the convent—was captured, they did not dare venture out of the convent. She also attended the convent school for some time but was very distressed to find herself in a totally new environment, among schoolmates who were all Catholic and to whom nothing could be said about her being Jewish. She remembers she would cry all the time, with the other girls asking the nun what was wrong with her, but nobody could reveal the reason. After a while, her mother stopped sending her to school. After liberation, their life was difficult; in addition to being sad about her grandparents’ and her father’s death, she had to bear the loss of many young friends who had been deported and whose exact fates she never learned.

After recovering from her illness, Enrica started working. At age 23 she married and worked with her husband, who was a salesman and is now 82 years old. They had three children, all boys, and now have eight grandchildren, one of whom just got married on May 13, 2012.

But Enrica’s misfortunes did not end with the war: She was at the synagogue in Rome when it was bombed by the Palestinian Liberation Organization on October 9, 1982. She still remembers seeing a terrorist moving toward her and her husband with a grenade and believes that’s what saved her, because she was able to run far enough away to only be wounded when it exploded; she remembers her husband lying next to her and all of the blood. She also recalls seeing, not far from her, the body of Emanuele Pacifici, who also was wounded. Both Enrica and her husband still have pieces of shrapnel inside their bodies, her husband in his legs, she in her head.

Enrica tells us that, while her childhood picture and the memories still cause her pain and anguish, seeing her grandchildren reminds her that she has been lucky: She survived, and she has been able to enjoy having a family.