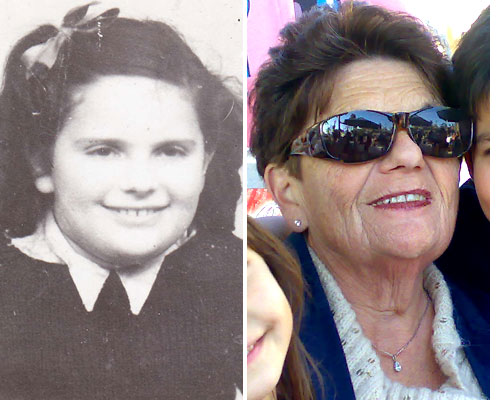 Esther-Paulette Kotek was born on March 21, 1938, in Paris. Her parents were both born in Poland; her mother, Zlata, in 1913 in Ozarów and her father, Chaim, in 1916 in in Opatów. They were married in Paris.

Esther was an only child and she does not remember her father because he left them in Pau, near the Spanish border, where the family was living, in order to find work in Paris. Her grandparents and uncles and aunts lived there as well. She does not have very clear memories of the war period as she was very young.

Records show that Chaim was taken first to Drancy and then to Pithiviers and finally to Auschwitz, where he perished.

Thirteen years ago, Esther gave letters that she had received from her father during his incarceration to Yad Vashem, but she has copies of the letters. She said that her children had no interest in them so she gave them away. Yad Vashem did not interview her.

During the war, Esther lived with her mother in Pau. They had some money so Zlata did not work. She placed Esther with a caregiver when it was known that the Gestapo would hold roundups. Esther remembers having to be very quiet. Toward the end of the war, the Gestapo came looking for Esther and Zlata and they hid in the attic. Mr. Pucheux, the owner of the building where they were staying, told the Gestapo that they already had been taken on a train. Years after the war, soon after she married, Esther and her husband visited Mr. Pucheux in Pau.

One of Esther’s cousins left on a train but his daughter, who had a fever, stayed with an aunt. That was how she survived.

After the war Esther and her mother returned to their home in Paris but there was nothing at all left there. It was completely empty. The neighbors gave them water to drink and they noticed that the glasses from which they were drinking had been theirs before the war.

Esther’s mother worked after the war and was given some assistance because Esther was considered a war orphan. Esther went to a public school and studied to become a secretary and an accountant. At the age of 19 she married and worked in her husband’s business. He was from Tunisia. She has two children and seven grandchildren who live in Israel not far from her.

Esther’s mother remarried after the war and her husband was like a father to Esther. He was a survivor of Auschwitz named Ben Zion Weisblum. They had a daughter, Esther’s half-sister, Mona Robczy, who lives in Karmiel and has three children and three grandchildren.

Esther and her family left France for Israel in 1979 and she lives in Kfar Yonah, near Netanya. Her mother, stepfather, and sister also moved to Israel at that time. They all moved because they did not want to expose the family to any possible antisemitism. Esther’s husband died 12 years ago.