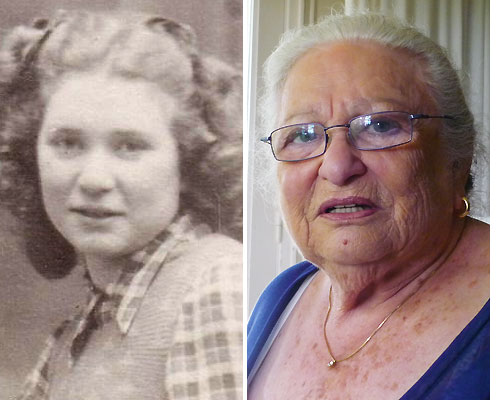 Esther Silberberg was born on June 26, 1930, in Antwerp, Belgium. Her parents emigrated from Poland to Belgium between 1920 and 1922. Esther had two older brothers, Félix and Léon.

When Esther saw her photograph on the Remember Me? site, she was troubled because it transported her back to the wartime era in the blink of an eye. Then, she wondered how this photograph, which was probably taken in 1945 or 1946, ended up in the United States and on the Museum’s Web site.

During the war, the Silberberg family decided to move to Brussels and then moved to the north of France. Esther’s older brother Félix had already left Belgium. Once in France, they paid a smuggler to help them cross the demarcation line. He took them to a farm near Dax. Instead of hiding the Silberbergs, the farmer took them to the Gendarmerie because they were Jewish. The family was then sent to a stadium near Pau before being interned in the camp Gurs (Basses-Pyrénées, today Pyrénées-Atlantiques). Esther, Léon, and their parents were later transferred to the internment camp Rivesaltes.

Thanks to the intervention of the archbishop of Toulouse, Monsignor Saliège, a group of ten Jewish children under 15, including Esther and Léon, was liberated from Rivesaltes. In July 1942, Esther and Léon went to one of the Oeuvre de Secours aux Enfants (OSE) children’s homes near Toulouse. Esther remembers that out of this group of ten children, three of them were from her neighborhood in Antwerp.

Esther and her brother wrote a letter to the son of their mother’s sister to ask for help (Esther’s uncle had three children). At that time, this cousin was living with his parents in Châtelus-Malvaleix in the Creuse region, in the center of France. He came to pick up Esther and Léon and take them home with him. Esther recalls arriving at her aunt and uncle’s house for Christmas 1942. Esther remained with them until the end of the war. Léon became a member of a youth movement in the center of France.

Esther learned later about her parents’ fate. They were transferred from Rivesaltes to Drancy and from there deported to Auschwitz on November 6, 1942 (Convoy 42). Both of them perished. Félix, who had left Antwerp ahead of the rest of his family, was deported from Drancy to Auschwitz on September 4, 1942 (Convoy 28), and never returned.

While with her uncle and aunt, Esther went to school where she remembers having a wonderful female teacher. After graduating, she became an autodidact and read widely on a variety of subjects. Only several years later did she continue her formal education. She attended classes at the Louvre for five years and then studied literature for three years at the Sorbonne. She was married in 1951 and had two children. After her children went to college, Esther ran a shop in Lille. She now has five grandchildren.