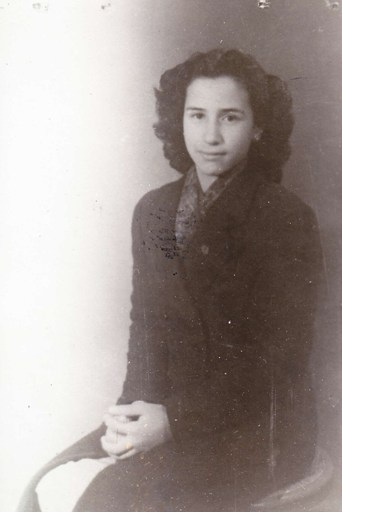 Franca Limentani’s picture was taken on July 15, 1946, so it could be sent to the family in the United States that was helping her and her family right after the end of World War II. In May 1946, Mrs. Mina Tropp contacted the American Jewish Congress and chose to help four children: two young girls in Rome, Franca Limentani and Bruna Tagliacozzo, as well as Peter Cohen in Romania and Leon Pulka from Cherbourg.

Franca remembers that Mina’s husband was called Ralph, that Mina was of Polish origin, and that they lived in New York City, where they ran a restaurant inside the hotel Oliver Cromwell. Franca still has the letters she and the Tropps exchanged between 1947 and 1956. Mina had a house in South Carolina, spoke Yiddish, and had two sisters, Esther and Dora, and one brother, Ralph. Franca also remembers that the Tropps had a young granddaughter.

The Tropps helped Franca’s family by sending parcels with food, medicine (including insulin for Franca’s mother, Virginia, who was diabetic), and sometimes money. Franca sent this photo in her first letter to Mrs. Tropp, whom she never met. It was mostly Virginia, who died in 1962, who kept up the correspondence with the Tropps. Franca still gets emotional reading the telegram the Tropps sent her on her wedding day.

When Franca looks at the photo taken in 1946, she recalls her childhood innocence and her adolescence. She also can’t help thinking of her sister, who died at age 20. Franca thinks of herself as lucky: She had a mother and a sister who took care of her and she survived.

Franca was born in Rome on May 14, 1932. During the Holocaust, her family went into hiding along with another family, the Tagliacozzos, in a neighbor’s apartment on Via dei Giubbonari. She remembers the neighbor was named Luigi Leggeri and he had four children: Antonietta, Nicoletta, Sigismondo, and Maurizio. He worked for the Vatican restoring paintings. The two families hid in the attic that Mr. Leggeri used as his workshop.

Franca’s father, Davide Limentani, was captured on March 24, 1944, and later died in the Ardeatine Caves. On May 8, 1944, Franca’s two brothers, Settimio and Angelo, were captured along with the young Angelo Tagliacozzo. They think that Angelo Tagliacozzo was probably followed while going to visit his fiancé. But it is also possible that the fascist police were just looking for some partisans. Franca is not sure. When the fascist police arrived at the apartment, Franca’s brothers and Angelo Tagliacozzo escaped to the roofs. But when the policemen threatened to arrest all the women and children in the house, the three young men surrendered.  Franca remembers that, as tragic as her brothers’ capture was, the police kept their word and did not take the women and children away. Her brothers were taken first to the prison on via Tasso and then to the Fossoli camp for a period of time. When they were there, Franca remembers they would communicate through notes they would sew inside their shirts’ collars and cuffs when they sent their laundry home to be washed. Most of those notes begged the family to leave the attic on Via dei Giubbonari as it was not safe anymore, so Franca and her mother and sister left.

The women lived for a while in a convent, but the nuns wanted Franca’s mother to leave, so they all left. Then, they found refuge in different apartments, always in Rome. That period was a bit less hard, but they were very worried about Franca’s father and brothers, from whom they had no news at that point. Franca learned later that her father had been killed. Settimio and Angelo were both sent to Auschwitz; Settimio was able to survive because he was sick when the Germans evacuated the camp so they left him in its infirmary. He was liberated by the Russians and, after a long and difficult journey, was able to reach Rome in September 1945. Franca tells us that her brother is mentioned in Primo Levi’s work, La tregua (The Truce), which narrates the Italian author’s return home after the liberation of Auschwitz.

Franca’s brother Angelo never returned, and her family does not know for sure what happened; they believe he probably died during one of the death marches from Auschwitz. Angelo Tagliacozzo, the other young man captured with Franca’s brothers, died in Dachau, on February 20, 1945.

Franca Limentani married at age 19 and had three children. She has spent her life taking care of her family. Her husband, Marco, had a small business that sold auto parts and died in 1993. They were happily married for 42 years and always lived in Rome.