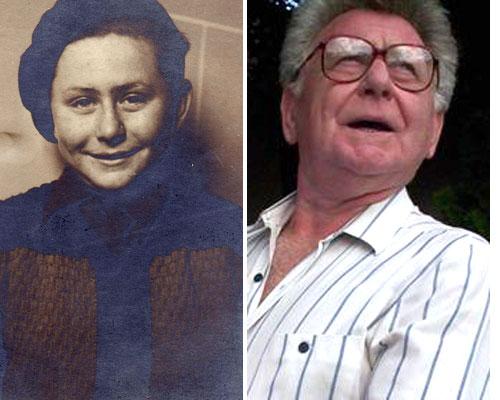 Ferenc’s father became a soldier in 1941. He was not allowed to bear arms because he was Jewish and was sent behind the lines to work. Ferenc remained in Hungary with his sister and mother until 1944. In the spring of 1944, Ferenc went to a children’s home run by Swedes. Ferenc and Maria did not know where their father was.

When the Germans occupied Hungary, ghettos started to appear. In October 1944, Ferenc and his sister were transferred to the Budapest ghetto where they remained until they were liberated by the Soviet army.

They started to look for their parents after liberation. Ferenc and Maria were in an orphanage at that time. Their mother’s sister and their grandmother had survived and took care of Ferenc and Maria until June 1946 when the Red Cross and the Joint Distribution Committee intervened to help orphans from Central Europe. Thanks to these organizations, orphans could spend a month in France, Holland, or Sweden. Ferenc’s aunt had worked for the Joint and was able to arrange for Ferenc and Maria to go to France. They went to Vaudoué, at that time a village in Seine-et-Marne.  They remained there over the summer while French children were on summer break. In September, when children went back to school, the orphans had to leave.

Some wealthy Hungarians then established the “Hannah Szenes” orphanage in Verneuil-sur-Seine where Ferenc and Maria remained for almost two years. The orphanage was run by Mr. Guttman and Mr. Fodor, and about 30 Hungarian orphans lived there along with French children. They all were between 12 and 15 years old and went to school in the village. The youngest had classes in the Château des Groux.

While in Verneuil, Ferenc remembered a photographer coming one day in the spring of 1946 or 1947 to take pictures of the children. These are the photos of him and his sister that appear on the Remember Me? site.

Ferenc learned in 1947 that his father had died in Auschwitz and his mother in Bergen-Belsen. His aunt and uncle who did not have children decided to adopt Ferenc and Maria at the end of 1947. That’s when they changed their surname to Aczél, their aunt and uncle’s surname, and returned to Budapest to live with them.

Maria became a chemist and still lives in Budapest. Ferenc did not want to become a chemist and was relieved when his application for chemistry school happened to be lost. He was more interested in literature and languages and worked for about 40 years for the Hungarian publishing house Corvina in Budapest. One of his colleagues there was Marthe Kecskeméti, another survivor who appears on the Remember Me? site.

Ferenc married in 1959 and had a son. Both his wife and son love music. His son became the director of a children’s theater and the art director of the opera. Ferenc also has a granddaughter who, he said, loves her grandfather.