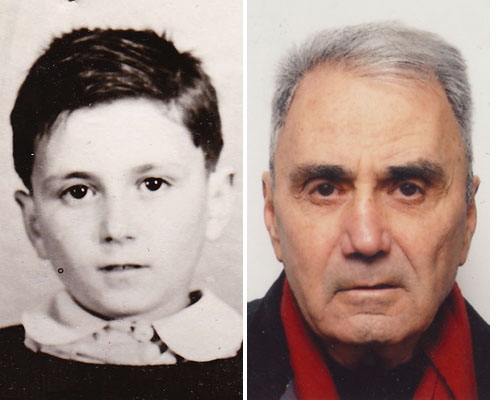 At the beginning of the war, Frédéric’s father volunteered in the French army and was wounded. After the Germans invaded France, he was arrested with Frédéric and released, only to be arrested again, sent to Drancy, and deported in 1943 to Auschwitz. Frédéric’s grandfather, grandmother, and one of his uncles were also deported; the uncle was the only one of this group to survive. A second uncle was also arrested, deported, and survived. A third uncle, named Willie, joined the French underground.

Young Frédéric was rescued and lived with a couple, the François, in the village of Meillant, near Bourges. Frédéric’s mother died of cancer in 1944. His mother’s sister was hidden by a French family in Chambord (near the famous castle in the Loire Valley).

Frédéric spent two years with the François in Meillant, and after the war he went to a boarding school in Paris for a few months. He was then raised by his father’s sister, who had two children of her own. The François had wanted to adopt Frédéric because they didn’t have any children, but his aunt was vehemently opposed to the idea and forbade him to see the couple.

Frédéric completed high school, and at age 17, still stateless, he started medical school in Paris. He was 35 and practicing medicine when he finally was reunited with the François, who by then had three children. One of the François children, who had often heard about Frédéric and was curious about him, began looking for him and finally found him.

Frédéric practiced as a gynecologist for 30 years in Orly, a southern suburb of Paris, and in the nearby hospital of Juvisy. He has been married for 48 years and has two children, a son and a daughter, and one grandson. He retired at age 62 and moved to Trouville, in Normandy, on the Atlantic Coast, where he became a practicing geneticist, specializing in racehorse breeding. He owns a horse breeding farm there.