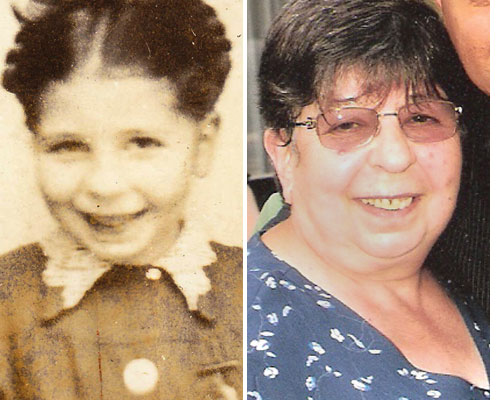 Georgette Ickowicz found out about the "Remember Me?" project from her friend Celine Jelen, whose picture is also featured on the site. She was surprised and very excited to find her picture and that of her brother, Bernard, among the children. Her family members were also excited to see the pictures. Georgette has the original photograph of herself as a child, which she thinks was taken at the kindergarten she attended in Paris when she was about five or six years old.

Georgette was born on May 20, 1939, in Neuilly-sur-Seine. Her older brother, George, was born in 1935 but died of diphtheria at the age of three, so she was named after him. Her mother, Isabel Bat Sheva Gottlieb, was born in 1906 in Liepaja, Latvia, the seventh girl in a family of eleven children. Her father, Ben Zion, was born in 1906 in Piaski, Poland. Georgette’s parents were married in Paris in 1936. Her grandfather was a rabbi. Ben Zion was arrested on rue des Rosiers in Paris in 1941 and sent to Drancy. On June 22, 1942, he was sent on Convoy 3 to Auschwitz, where he died a month later.

Georgette’s mother had a Christian friend whose Jewish husband was also deported. She helped hide Georgette and Bernard in Paris right after their father was deported, and later they were hidden with a Christian family outside of Paris in Vitry-sur-Seine. The family did not know they were hiding Jewish children. They were very nice people, and they had good food. Their mother remained in hiding in Paris with little or no food and tried to find out what happened to her husband and the other deported Jews. She wore the yellow star throughout the war, and Georgette keeps it in a special box. Only on the weekends when she used to come to see her children was her mother able to eat reasonably well.

After the war, the children were reunited with their mother and returned to their home in Paris in the 16th arrondissement. They received support from the Joint Distribution Committee and other organizations because the children had lost their father. Georgette joined Ha-No'ar ha-Tsioni, the Zionist youth movement, and became interested in living in Israel. She loved the group meetings, the stories about life on a kibbutz, and the Israeli songs and dances.

At the age of 20, Georgette decided to make aliyah. Her mother at first opposed this, but she finally agreed to send Georgette to Kibbutz Usha for one year. Georgette never went there, though. When she arrived at the port of Haifa, the secretary of Kibbutz Hasolelim was waiting for her. He drove her to join 25 French and Belgian friends who were waiting for her to join their group. In 1959, she spent a year on the kibbutz in a special program and there took the name Choucas, a night bird, and dropped the name Georgette at the suggestion of the scouts. She was 21 years old at the time.

Choucas has remained on the kibbutz ever since. She worked hard in many areas of the kibbutzbut since retiring has been spending every morning with the kindergarten children. She enjoys working there very much.

Choucas married her husband, Philip, in 1960. He had made aliyah from South Africa in 1956. They have three children and six grandchildren. On the kibbutz Philip worked with the sheep and later as an electrician. Unfortunately he died at a young age in 1979, and she has been a widow ever since.

Choucas’s mother, Isabel, remained in Paris but visited her two children often. Bernard now lives in Baltimore with his family. Isabel had a heart attack on her last visit to Israel and died there in November 1974. In accordance with her wishes, she was buried on the kibbutz.