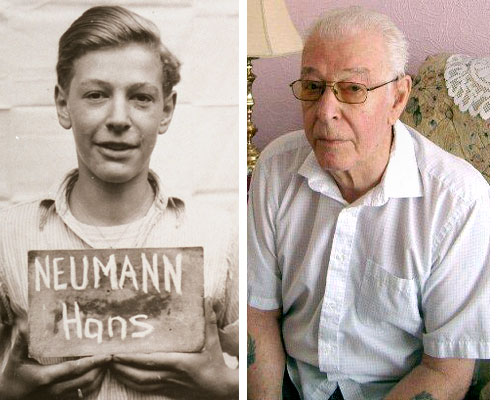 Hans Neumann was born in the Charlottenburg district of Berlin, Germany, in 1929 to Moses and Elizabeth Johanna Neumann. His mother died in Berlin in 1938, and his father in 1941. On July 2, 1942, Hans and his brother, Leo, were deported to Theresienstadt, where Hans remained until the camp was liberated by Soviet forces in 1945. Leo Neumann did not survive.

After liberation Hans travelled through the Czechoslovakian woods with his fellow former prisoners of Theresienstadt, Herbert Hahn, Walter Hahn, and Julius Weiss, until they were stopped and arrested by American troops in Germany because they had no identity papers. Eventually, all four survivors arrived at the children’s home Kloster Indersdorf.

Hans refused an offer to emigrate to America after the war, because “to my eyes, America seemed so far away,” he says. He originally had dreams of returning to Berlin, but he accepted aid from the United Nations Relief and Rehabilitation Association (UNRRA) to go to England in 1945. Upon arrival in England, Hans first found work firing steam-powered locomotives and eventually became an electric engine locomotive driver. In 1951, Hans became a corporal in the British Army, Royal Engineers.  He met his wife, Elisabeth, in Essex, England, and has been married for over 60 years. He has two children, four grandchildren, and two great-grandchildren. He still lives in Essex.

NOTE: Hans Neumann passed away on August 23, 2011, just a few months after this update was posted.  We are so very grateful to have had the chance to speak with him and to record and share his history with all of those who visit our site.