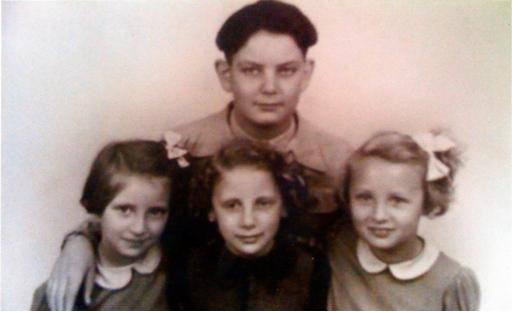 Danielle was recognized by a member of the French association Convoi 6 who gave us her contact information. When we called her, she was surprised and moved to see her photograph on the site. She said she could not believe that her photograph ended up in the United States. Her children had never seen this photo of their mother before. After our first e-mail exchange, Danielle spent more time looking at the “Remember Me?” site and recognized her sister, Monique, and two cousins, Sarah Warech and Henri Gotainer. She still has a photograph of all four of them together that was taken in 1946 in Denain, France.

Danielle’s father went to school in Pinsk, then in Germany and Gand, Belgium, before moving to France in 1928 after receiving a diploma of engineering given by the king of the Belgians. He found a job in St. Nazaire as an engineer, working in the engine room. He was sent to Nevers by his employer in 1941. There, he was arrested on July 13, 1942, by the French police. He had enough time to send a telegram to his wife. Danielle’s mother along with Danielle’s aunts, grandmother, cousins, and sister, Monique, were living in Vihiers, near Angers in Maine-et-Loire. On July 15, they were all arrested. Danielle’s aunt, Léa Warech, escaped by jumping out the window. The rest of the family was taken to the grand séminaire in Angers and then to Drancy. Danielle, Monique, Sarah Warech, and Henri Gotainer were separated from the grown-ups.

A day before the next transport to Auschwitz, Henri was diagnosed with diphtheria and sent to the Hôpital Claude Bernard in Paris. He recovered and survived the Holocaust. In the meantime, Danielle, Monique, and Sarah were sent to the Union Générale des Israélites de France (UGIF) home, Rue Lamarck, in the 18tharrondissement of Paris. They were on the list of children who could be deported at any time. In February 1943, they were all sent back to Drancy before going to another UGIF home on rue Guy Patin in the 10tharrondissement.

In February 1944, Léa Warech managed to get to this children’s home and take Danielle, Monique, and Sarah away with her. Lea took the three children to a house in Denain to stay with the half-brother of Danielle’s maternal grandfather. Léa was later arrested in Paris and deported to Auschwitz. She survived Auschwitz and came back to France. Although she was very weak, she was able to send a telegram to the grandfather’s half-brother to let him know that she was coming back to take care of the children. She then took Danielle and Monique. By that point, Sarah’s father, Jacques, had returned from Germany where he had been a prisoner of war.

In 1946, Léa married Serge Gorfinkel, who was also a Holocaust survivor, and went to live at 120 rue Nollet in the 17tharrondissement. Léa wanted to go to Israel, but Jacques Warech told her that he would not let her take Danielle and Monique. Therefore, she decided to remain in France. Danielle went to boarding school in Valenciennes for four years and then to another school where she could come back home every day. Monique went to school and learned bookkeeping. After completing the first part of the baccalauréat, Danielle started to work in Léa and Serge’s lingerie shop in Denain. Later, she worked in another shop in Douai that also belonged to Léa and Serge.

In February 1964, Danielle married Raymond, the nephew of a POW who was friends with Jacques Warech. They had met at Sarah’s wedding in 1960. Danielle has two children: Claire, born in 1964, and David, born in 1967. In 1972, Danielle and her husband moved to Paris where they opened a bookstore in the 17tharrondissement. Raymond passed away on November 22, 2009. Nowadays, Danielle keeps herself very busy. She attends the Oeuvre de Secours aux Enfants (OSE) meeting every week, plays bridge several times a week, and reads a lot. She said she loves learning and reading is one way of learning things. She is a real book lover because she not only loves reading books, but also their smell and the feel of the paper.

Danielle’s sister, Monique, married in 1961 and had two daughters: Martine, born in 1962, and Esther, born in 1967. Monique lived in Valenciennes. She passed away in August 1976. Danielle remembers her sister as someone who was very outgoing and liked to socialize. She also had a good sense of humor.

Danielle’s cousin, Sarah, married in 1960 and had two sons. She lived in Chambéry. She passed away during the 1990s. Danielle remembers her as someone who liked manual work and was very talented.

Léa Warech died on September 1, 2009. Danielle never asked her any questions about her deportation because she did not want to upset her by raising the subject. Before she passed away, though, Léa told her story to Danielle.