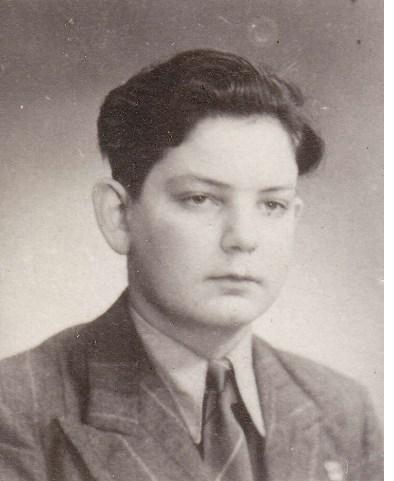 Henri Gotainer was born on March 9, 1931, in the Hôpital Rothschild in the 12tharrondissement of Paris. His parents came from Poland and were stateless since they had never obtained French citizenship. Henri became a French citizen on March 15, 1937. His mother, Sarah Warech, was born on July 24, 1910, in Lodz, but her family was originally from Zaklików. Sarah was an apprentice seamstress. Henri’s father, Chaïa (Charles) Gotainer, was born in April 1907 in Brzeznica or Nowo-Radom. He was a shoemaker. In France he opened a shoe factory and imported used shoes from America that he repaired. Later, he worked as a stall-keeper until the war broke out. Sarah’s family arrived in France in 1925. Her parents, Joseph and Brandla Warech, spoke Yiddish and were very observant. Henri’s parents met in Denain in the north of France. They at first had a religious marriage. Later, on July 20, 1935, they had a civil marriage under French law. Sarah gave birth to a stillborn child, and when she became pregnant with Henri, she decided to go to Paris.

Both of Henri’s parents worked very hard, and neither experienced the pleasure of days off. When Henri was born, he had a nanny named Elise Raouet, who lived on the same street as Henri’s family. Her husband was Mr. Fernand. Henri remembers her as a second mother. Later, because of his parents’ long hours, Henri had to stay in a pension. In 1938, Chaïa had enough savings to buy a little shoe store (Chaussures Charles) located on the main street in Denain. Henri is very proud of his parents for what they were able to accomplish in such a short amount of time. For them, working was a blessing because they had been persecuted in Poland and were given a chance to live freely in France. Both of them spoke French with a thick accent. Henri’s father, who was not a believer, read the Communist Jewish newspaper in Yiddish, Naïe Presse, and supported the International League against Antisemitism (LICA). Henri remembers hearing his father talk about LICA’s founder, Bernard Lecache.

In July 1939, Henri was at a summer camp in La Baule (Loire-Atlantique department), where his aunt, Léa Warech, was one of the instructors. When war broke out in September 1939, the children stayed at the camp until the following spring. Henri returned to Denain in April 1940 but soon left with his family because the town was being bombed. They eventually settled in Vihiers, where Henri went to school in the same class as 30 other children of various ages. When the first Jewish ordinances were promulgated in October 1940, the family disagreed on whether they should register as Jews with the local authority or not. Henri’s grandfather was very respectful of the law and advised the family to register, which they all did, except Henri’s father who would, however, later be added to the lists.

In 1942, despite difficult conditions for studying, Henri passed the high school entrance exams and registered at the lycée in Chôlet. On July 15, he was outside his house giving a Guignol puppet performance  when he saw two Feldgendarmes and military trucks on the road that led to his house. There had been rumors about possible arrests, and Henri’s father had gone into hiding at a friend’s house in the Mayenne. He was arrested nonetheless at the bus station and was in the truck that stopped in front of Henri’s house. Henri’s aunt, Léa, jumped out the window when she saw the Germans and escaped. Henri’s parents were both taken away in the truck. Before leaving, they kissed Henri and gave him their wedding rings. That was the last time Henri saw his parents. The truck then stopped in front of Henri’s grandparents’ house and took his grandfather before arresting the rest of the family. Because the Germans did not have orders to arrest children at this time, Henri and his three cousins (Danielle Simenow, Monique Simenow, and Sarah Warech) were left alone with their grandmother.

Henri stayed with his grandmother until October, when the French gendarme who had denounced his father showed up to arrest her and the four children. They were taken to the local gendarmerie and later to a seminary in Angers where they were kept in cells. On October 17, they were taken to the Angers train station (from which Henri’s parents had been deported to Auschwitz on Convoy 8) and from there to Drancy. At the end of October, Henri was diagnosed with diphtheria and received a vaccine to which he developed a terrible allergic reaction. He was taken to the Hôpital Claude Bernard in Paris and kept in the unit for prisoners and psychiatric patients. He was cared for there for three weeks before being transferred to the Union Générale des Israélites de France (UGIF) children’s home, Rue Lamarck. He was eventually reunited with his cousins in Denain, thanks to the intervention of his aunt Léa. He lived with his uncle, Jacques Warech, who had returned from Germany where he had been a POW.

Henri went back to school and tried to catch up on his studies. In 1950, he graduated from high school and went to Paris to study law. He served for 28 months during the war in Algeria and became an Air Force officer. This enabled him to get a job in 1960 with Air France, where he worked for 31 years.

Henri lost 25 members of his family in the Holocaust, all of whom were deported and murdered in Auschwitz: 18 from the paternal Gotainer family and 7 from his maternal family. In 1945, Henri made a promise to himself: Although he was not observant, he would always consider himself Jewish and wanted his children to be raised as such. He is married to Arlette Benichou, who was born in Algeria, and they have two sons (Bernard and Alain) and five grandchildren.