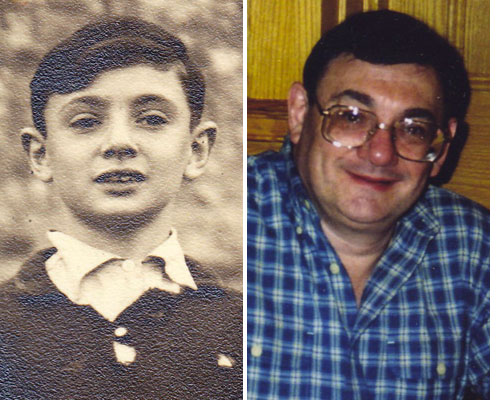 Ronnie Goldstein had never seen this photograph of her late husband, Henry Shapiro, before coming across it on the Remember Me? website. The photograph brought out a mix of emotions in her. She smiled at how cute he was as a boy, but at the same time she felt sad about what he had been through and what he had lost during the Holocaust. She remembers Henry as a kind person and a great guy. He had an upbeat personality and everyone loved him. Nevertheless, he was haunted by what he saw and heard as a child.

Henri Szapiro (who changed his name after he became a US citizen) was born in Antwerp on November 14, 1935. His parents had immigrated to Belgium from Poland. He had a brother, André, who was four years younger. After Germany invaded Belgium, Henri’s father was arrested by the Nazis and eventually deported. His mother was later arrested when she went out to get food for Passover. Henri had documentation showing that both of his parents died in 1942. After their parents were deported, the two brothers were placed in hiding; André was on a farm while Henri was in a convent.

Henri told Ronnie about some of his life in hiding. He was baptized Catholic while at the convent. He remembered Germans who came to the convent showing the children Hebrew writing to try to trick the Jewish children into giving themselves away. Ronnie remembers her husband once telling her, “You read about the Battle of the Bulge, but I actually heard it.”

Henri and André both survived the war, and André now lives in California. After the war ended, Henri lived in a Jewish orphanage, working as the librarian and selecting books that would be suitable for the other children. It was here that he developed his lifelong love of books and reading. In January 1952, he left Europe, sailing from Genoa, Italy, for the United States, where his father’s brother had lived.

Henri lived in the New York area. He spent time in Tuckahoe preparing for and then passing his Regents exams. He then lived in Manhattan. In 1958, he joined the army. Fluent in five languages, Henri served as a translator for generals in Europe during the Cold War. He later told Ronnie that he was uncomfortable when stationed in Germany, but he wanted to serve his adopted country.

In 1960, Henri returned to the States. He worked nights selling advertising at the New York Times while studying for his degree in accounting at City College. After graduating, he worked as a controller at the Bendix Corporation in Manhattan. There, in 1979, he met Ronnie. They began dating during the 1980s and married in 1986. He became a US citizen and changed the spelling of his name. In 1990, Henry and Ronnie adopted their son Steven from Hungary. At the time, Steven was four and a half years old. Henry wanted to adopt a child who was the same age he was when he last saw his parents.

Henry and Ronnie had a wonderful life together. Henry was very young at heart, and the couple’s friends often forgot that he was 15 years older than Ronnie. Tragically, Henry died of pancreatic cancer on September 21, 2010, just three months after his diagnosis. Over the course of his life, Henry had accumulated a large number of books about World War II. Reading them, Ronnie says, helped him to understand what he had been through as a child. While he was dying, he and Ronnie agreed to donate his library to Westchester Community College so that future generations will know about this period of history. Ronnie thinks the Remember Me? project is important for similar reasons. Because even the last generation of survivors is dying, she thinks it’s important to record their histories while we still have time. She also says that preserving individual experiences provides evidence to fight Holocaust denial.