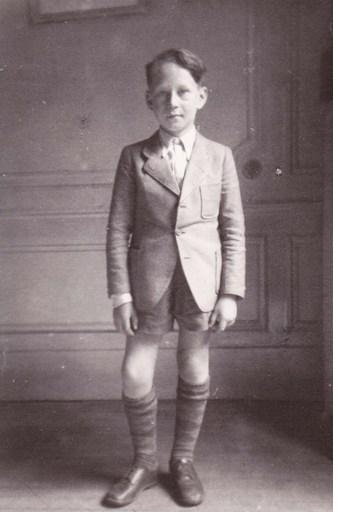 Isidore Minc had never seen this photograph before and had no recollection of it. He thought it might have been taken around 1946.

Isidore was born on November 10, 1935, in Ougrée near Liège, Belgium. His parents were originally from Poland. They immigrated to Germany in the early ’30s and then went to Belgium, where they stayed for about a year before crossing the border in 1936 and settling in France. There, they lived in the 20tharrondissement of Paris. Isidore’s father, Sigmund, worked as a tailor, while his wife, Rose (née Koppel), was a housewife.

Isidore remembers that when France was invaded, his father took him to a safe place in Le Raincy where he stayed with a woman named Mrs.Vallon. She was the director of a school on the boulevard Voltaire in the 11tharrondissement of Paris. Isidore stayed safely there for the whole war.

During the war, both Isidore’s parents were arrested and deported—his mother in 1942 and his father in 1943—to Auschwitz, where they were murdered.

Isidore had a brother, Maximilien, who was born in Poland. He was 16 years older than Isidore. Maximilien was arrested and sent to Algeria by the French authorities. There, he was later recruited by the Polish army and sent to the Soviet Union to fight.

After the war, Isidore went to live with his father’s cousins, the Rappaports, who did not have children and took care of him. Like Isidore’s family, they lived in the 20tharrondissement. Isidore remained with them until 1949. Then he decided to join his brother in Poland. After the war, Maximilien enrolled in the Polish army and was living in Warsaw. He married Elizabeth Darewska and had a child, Justine.

In Poland, Isidore went to school and learned to become a car mechanic. He also did his military service in Poland and worked as a mechanic. In 1962, Isidore decided to go back to Paris where he worked for the French car company Renault. In 1972, he got married.

Maximilien eventually left Poland in 1968 to go to Israel with his second wife. Maximilien’s daughter, Justine, had already left for Israel. They remained there for two or three years and then moved to Germany. Justine immigrated to the United States.

Maximilien died in October 1994. Isidore is still in contact with his niece, Justine.