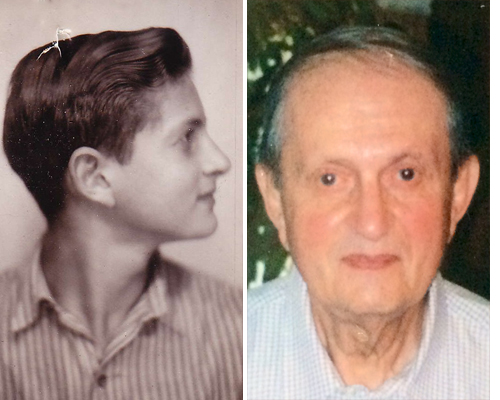 After Marla Byrnes saw her father’s photograph on the Remember Me? website, her son Patrick Byrnes wrote to us with this information to share about his grandfather.

This is my grandfather, Jacob Jakobowicz. My mother uncovered this picture recently, and my grandfather believes it was taken shortly after the war.

Jacob was born in Paris in 1929 to immigrant parents. His father was from Poland, and his mother was born in a part of Russia that is now Belarus. His mother, Ryvka, was the sister of Wolf Kranowski  Wolf's son Nathan also appears on the Remember Me? site.  An only child, Jacob was 12 years old at the time of his arrest in July 1942 during the Vel d'Hiv Roundup. He and his parents attempted to escape Paris by car in 1941, but the German forces were blocking all exits, and the family was forced to return to Paris to live under German occupation.

While in confinement with his parents at the Vel d'Hiv, Jacob came down with appendicitis. This proved to be a lifesaver because the Nazis allowed him to be transported to a hospital for treatment. While recuperating, he was told that he would soon be reunited with his parents at the Beaune-la-Rolande internment camp. I'm not quite sure how he was able to recognize this as a 12-year-old, but he knew this was not good.

Jacob was able to contact some cousins who had not been arrested because they worked in a factory that provided coats to German soldiers fighting in Russia. His cousins were able to secure his release. Fearing for his safety, Jacob’s aunt sent him to Normandy to live until after the war. There he began using the name Jacques Voudka. He had interactions with German and American troops while living in Normandy, but, fortunately, his real identity was never discovered by the German soldiers.

Both of Jacob’s parents were deported to Auschwitz, although his father presumably perished during the journey; his mother, Ryvka, was killed at Auschwitz.

After the war, Jacob returned to Paris to live with his aunt; he never saw his parents again. In 1947, he moved to the United States and had his name legally changed to Jack Jakobowicz. He lived in the Bronx briefly before moving to Massachusetts, where he met my grandmother (who was Christian) and had two children, Marla and Eric.

As of this writing in January 2014, Jack is 84 years old and living near his daughter, Marla—my mother—near Hartford, Connecticut.

While not Jewish myself, I do feel a deep connection with the Jewish community and share in the sense of loss and horror that was caused by the Holocaust. My grandfather's will to survive and quest for freedom is truly inspiring, and I hope that by sharing his story, I can add to the collective remembrance of all who perished during the Holocaust, including my great-grandparents and nearly all of their relatives.