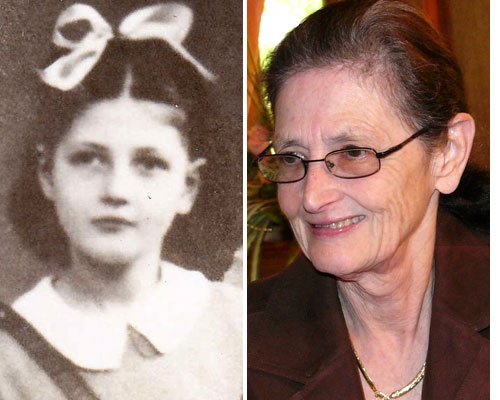 Jacqueline Ramstein was very surprised to see her photograph on our Web site and was very moved when reading about the Remember Me? project. She thought the project was terrific and wanted to contact the Museum.

She does not recall when this photo was taken, but assumes that it was taken after the war by a professional photographer (maybe Chez Jérôme, on the rue de Rivoli in Paris).

Jacqueline was four years old when her father was arrested on the street on August 22, 1941. Her brother, Samuel, witnessed the arrest and told their mother right away. Chaja Ramstein and her two children ran to the place where her husband was being held prisoner. The last image Jacqueline has of her father was his face behind bars. On August 25, 1941, he was transferred to Drancy and was deported to Auschwitz ten months later, on June 22, 1942 (Convoy 3). He died three weeks later on July 18, 1942.

Jacqueline remembers her mother preparing packages to bring to her husband while he was in Drancy. She also remembers some of her mother’s friends trying to comfort her in Yiddish, telling her that her husband would probably be protected since he was a French citizen. Although Jacqueline’s first language was Yiddish at home, she did not quite perceive the details of the situation but understood the gravity of it. Her mother did everything to protect her children, but Jacqueline remembers that she could feel her mother’s anguish. Her mother told Jacqueline and Samuel that their father had been arrested, but nothing would prevent them from staying together.

Nevertheless, the situation in Paris became more and more dangerous. In February 1943, Jacqueline’s mother decided to take her children to a children’s home run by the Union Générale des Israélites de France (U.G.I.F.) on the rue Lamarck (18tharrondissement of Paris). In the afternoon of that same day, though, she changed her mind and wanted them back home. She went back to rue Lamarck, but the staff there did not want to give her back her children. The next day, she returned early in the morning and was able to take Jacqueline and Samuel back home. That same day, all the children and staff of this U.G.I.F. home were arrested by the French police.

When the German ordinance imposed the wearing of the Star of David, Jacqueline remembers that she was jealous of her brother and mother because she did not have to wear it on her clothes since she was under 6 years old. Only a year later, in June 1943, she too had to wear the Star of David when she turned 6. She did not wear it for long, though. In the summer of 1943, Jacqueline’s mother made the decision to hide her children in the countryside. Jacqueline and Samuel were sent to La Chapelle-du-Bois-des-Faulx, near Evreux in Normandy, to stay with a nanny who also took care of five other Jewish children. Jacqueline and Samuel arrived in Normandy thanks to a network of rescuers for children to which belong two women: Mrs. Breton, a medical doctor in Paris, and Mrs. Duchemin, who lived in Normandy. In 1983, Yad Vashem recognized both women as Righteous Among the Nations.

Jacqueline does not know much about how her mother survived the war in Paris. She believes that she was hidden and helped by the building’s concierge couple (Mr. and Mrs. Bouju), who had always been nice to the family. They provided Jacqueline’s mother and her children with food after the war.

After the liberation, Jacqueline went back to school. She was a very good student and on several occasions, she was helped by her teachers who encouraged her to continue to study and persuaded her mother that she had to go to high school. After consulting with her mother and brother, they all decided that Jacqueline would go to medical school. Samuel was also in medical school and worked in the Halles market at night to pay for her sister’s studies. Jacqueline said she will always be grateful to her mother and brother for what they have done for her.

Jacqueline became an ophthalmologist and decided to work in the public sector in order to give something back in return for the chance she has had to study and help others. She married in 1958 and has three children (two sons and a daughter) and six grandchildren, all boys. She has lived in France until this day.

Yiddish has been an important part of Jacqueline’s life. She is currently working with her husband, David Kurc, on a book of historic and contemporary Jewish stories entitled Vitsn (Jokes).