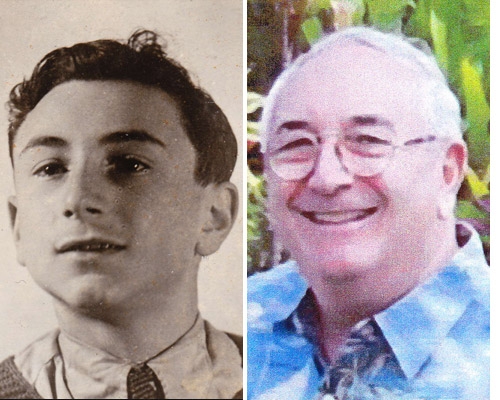 Jacques Karpman–Boutet was born in Paris in 1932 to Max and Marie Karpman. His sister, Suzanne Cohen, also a child survivor, had seen Jacques’s photo before and has a copy of it in her files. She doesn’t remember when it was taken but believes that it was while they were in an orphanage operated by members of the Union Générale des Israélites de France (UGIF) in Paris.

During the summer of 1942, Max Karpman, who was originally from Poland, was told to report to his local police precinct. He went to the precinct on the appointed day. He never returned. He was later deported to Auschwitz aboard Convoy 2 on June 5, 1942. He is believed to have been murdered there. Marie, Jacques, and Suzanne remained in Paris.

Out of concern for her children’s lives, Marie Karpman left Paris on what was supposed to be a short trip to visit some friends in the countryside to see if they would be able to hide her children. On the train back to Paris she was arrested. Suzanne and Jacques were taken in by kind neighbors. Marie was first incarcerated in Chateaubriand in Brittany. While there she met a French Red Cross worker named Annette Monod. When Chateaubriand was closed Marie was moved to Aincourt in Seine-et-Oise. Annette went to the Karpmans’ neighbors, gathered Suzanne and Jacques, and took them to Aincourt to be with their mother. When Aincourt was closed in 1942, the prisoners were to be transferred to other locations. Suzanne recalls that a French commissar contacted Annette and asked her to do something about four of the children in Aincourt: Jacques, Suzanne, Jacques Schildkraut, and another young girl whose name Suzanne cannot remember, but who was retrieved from the camp by a family member. Suzanne remembers getting on the same truck with Marie and Jacques and driving to Paris, where she and her brother said goodbye to their mother for the last time in the Red Cross headquarters. Marie was taken to Drancy and was later deported to Auschwitz aboard Convoy 32, which left Drancy on September 14, 1942. Like Max, Marie was never heard from again.

Suzanne credits this French commissar and Annette Monod with saving her and her brother’s lives. After parting from their mother, Jacques and Suzanne went to the orphanage operated by UGIF. Jacques was assigned to live on the boys’ floor while Suzanne lived above him on the girls’ floor. One day an orphanage manager came to tell Suzanne that a home in the countryside had been found for Jacques and that he would be leaving the orphanage. Jacques was nine years old at the time. Suzanne remembers this news as “being very hard to hear,” because she was being separated from yet another member of her family. Sometime after Jacques was taken to the countryside, German officers raided the orphanage. Suzanne hid throughout the night while other children were being taken away. At daylight, when she thought it was safe to leave her hiding spot, she approached some of the orphanage administrators who were still in the building. They suggested that she join her brother in hiding in the countryside. Suzanne believes that one of the administrators gave her enough money for the train ticket.

She traveled to Sermaise where the Satori family was hiding her brother. Suzanne remembers that conditions there were harsh. When she was reunited with Jacques, he was “malnourished and with hardly any shoes left on his feet.” He had been put to work watching pigs. Suzanne settled into life with the Satoris and Jacques as best as she could, but then Mrs. Satori asked her to leave the family and return immediately to Paris, where Suzanne had nowhere to go and no one to whom she could turn for help. Suzanne went back to the orphanage in Paris. There, the main physician, DuBois Wechsler, who was also Jewish, asked her where she was going to sleep that night. When she replied that she didn’t know, he took her to his home where he lived with his wife and three children. They decided that Suzanne would stay with them in Paris. She ended up remaining with them for ten years. A non-Jewish widow who was a friend of this family, Lucienne Boutet, came to visit one afternoon and asked if there was anything she could do to help a Jewish child in need.  She herself had been adopted by the French Jewish poet Gustave Kahn. It was suggested that Jacques come back to Paris from Dourdan, where he had been moved after Sermaise. Lucienne later officially adopted Jacques.

Jacques Karpman-Boutet went on to become a physician. He met his wife, Sylvia Coenca, also a French native, while they were interning in the same hospital in Hackensack, New Jersey. They married in New Jersey and then returned to France where they both became doctors and adopted a child.

Jacques Karpman-Boutet passed away on July 2, 2011. Suzanne remembers that her brother was extremely proud of the memory of his adopted family and especially of the work and life of his adopted Jewish grandfather, Gustave Kahn.