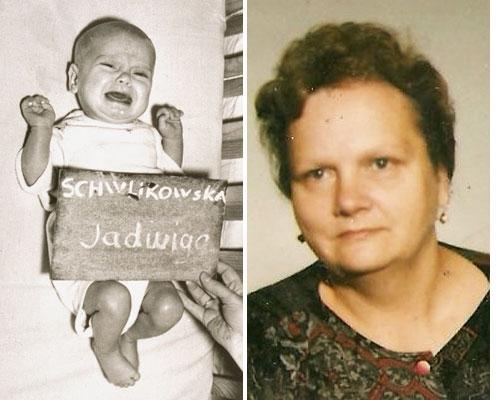 Jadwiga Schulikowska (Szulikowska in Polish) was born in Munich on January 9, 1945. Her German birth certificate listed her name as Halina Jadwiga Schulikowska. Known by friends and family as Jadzia, she passed away on August 15, 2011. A week or so after her death, her daughter Anna Otremba, who lives in the United Kingdom, Googled her mother’s name and found the Remember Me? website. Anna had seen this photograph before and was eager to tell us what she could about her mother. Anna travelled to her native Poland to see her father, and the two of them pieced together what they could about Jadzia’s early life.

When Jadzia was born, Munich was being bombed. She and her mother, Josepha Brendel, a Polish forced laborer, were wounded and separated as a result. On May 2, 1945, Jadzia was taken to Schwabing Hospital. From there, she was taken to Kloster Indersdorf, where this photograph was taken, on September 24, 1945. Greta Fischer described her as a “very lively child” and “intelligent.” In late 1945, Jadzia was sent to Switzerland en route to Poland. Anna has a letter from a volunteer in Geneva who took care of her mother. Jadzia was a favorite of those caring for the children there. The volunteer described her as sweet and lovable.

Jadzia finally arrived in Poland in mid-1946. On January 31, 1947, she was adopted by Franciszek and Gertruda Zgraja of Katowice, who had previously adopted a son. Jadzia went to vocational school and became a tailor.

When Jadzia was 16, she met Edward, who baked cakes in a patisserie. They fell in love and married in October 1963. They had three children: Klaudia, born in 1966; Damian, born in 1969; and Anna, born in 1982. Jadzia finally had the chance to meet her birth mother in the 1980s, but sadly, her birth father, who had wanted to find her, too, had long since passed away.

Anna considers herself “one of the luckiest kids in the world” because she was Jadzia’s daughter. Jadzia was kind, caring, and “always on our side.” Anna also tells us that her mother was very happy with her life and her family. Jadzia is sorely missed by her husband and children. Anna thinks that Remember Me? is a “great project” and adds, “It’s great that someone out there is making sure that these children are never forgotten.”