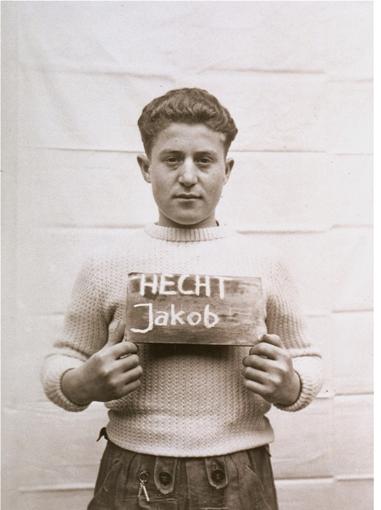 Jacob Hecht’s daughter, Nina, found her father and her uncle, Martin Hecht, among the Remember Me? photographs. She was very excited about her discovery and told them about the site. Although her uncle was interested and has since visited the Museum, Jacob has not wanted to dwell much on the past. Since the war, he has sought to put that painful part of his life behind him and look forward to the future. Unlike his brother, Jacob has not attended any of the reunions at Kloster Indersdorf in Germany where he spent some time after the war.

Jacob was born in the same town as his father—Ruskova in Transylvania, now Romania—in 1929. He was the second youngest of eight children, five boys and three girls, born to Hannah Dub and Joseph Hecht. Jacob’s father had a large, prosperous farm and was rather well off. They had maids, and his mother traveled to spas in her native Czechoslovakia. Like all the Jews in the village, Jacob’s family was observant, and they were Zionists. They spoke Yiddish and studied Romanian and Russian in school. Four of his siblings made aliyah to Palestine in the early ’30s. Unfortunately, one of the brothers returned in 1938 and died during the Holocaust along with their parents and one other brother. The names of the brothers who were killed in the war were Shmuel and Yisrael.

Martin and Jacob were together throughout their incarceration during the war, from 1944 until their liberation in 1945. After the war, they were brought to England as part of a group of 735 children allowed into the country by the government but supported by Jewish organizations. Their siblings who lived in Israel did not insist that they come to live there.

Jacob eventually became a businessman but is now retired. He and his wife, Maureen, have a son and daughter and two grandchildren. Their daughter, Nina, is active in the Generation After organization in Israel.

Jacob belongs to an organization of survivors who meet and talk in Yiddish about various subjects, including current events, and he enjoys these meetings very much.