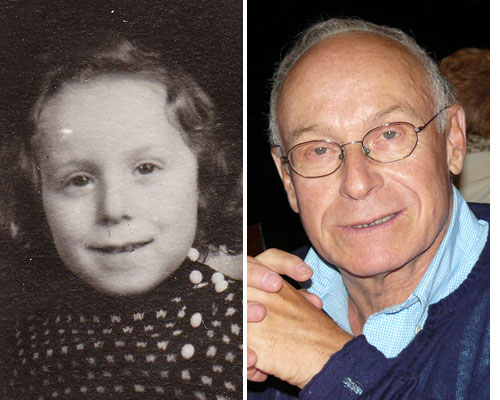 Like many people, Jean-Claude Goldbrenner Googles himself from time to time to see what information about him might be online. This is how he recently discovered that his photograph is one of those featured in our Remember Me? project. Jean-Claude has no recollection of this photo being taken, but he has seen it before. He thinks it was taken in 1945 or 1946. In 2004, while doing research online, he discovered that the American Jewish Archives in Cincinnati had this photograph as well as those of some of his friends. The archive sent him copies of the photographs. Two of his friends, who are ten years older than he, also appear in the pictures, but they don’t remember being photographed, either.

Born in Bergerac in 1942, Jean-Claude was the only child of parents who had fled the northern French town Valenciennes when the Germans invaded. During the war, his parents were both arrested. Jean-Claude’s mother was arrested in May 1943. At the time, she was six or seven months pregnant with a second child. Jean-Claude still has the letters that she wrote from jail and then from Drancy, the transit camp through which thousands of French Jews were deported to Auschwitz and other camps in Eastern Europe. The letters capture her initial optimism that she would be released as well as her later despair as she realized she would not be able to avoid deportation. On July 31, 1943, she was deported to Auschwitz, where she was murdered in the gas chamber immediately upon arrival a few days later. Jean-Claude’s  father was first captured in March 1944 but managed to escape from the convoy on which he was being deported. He was captured again and sent to Auschwitz in June 1944. Jean-Claude’s father was a strong, athletic man and a talented soccer player. Toward the end of his life, Jean-Claude’s father told him that, while he was a prisoner, the Nazis had him play in weekly soccer games. They fed him better than other inmates, and this was probably a key factor in his survival. Nevertheless, when he returned to his family after the war, Jean-Claude recalls, his father was on crutches and weighed only 80 or 90 pounds.

Although he was separated from his parents and lost his mother, Jean-Claude considers himself fortunate because he was in constant contact with family members during the war and because his grandparents and father survived the war and were there to take care of him and raise him lovingly. After his mother was arrested, his grandparents and aunt cared for him. He spent some time with other children hidden on a farm, but even then, he was in contact with his relatives.

After the war, he lived with his grandparents in Valenciennes. Later, he moved to southern France to live with his father when he remarried. At the age of 17, he moved to Paris, where he studied for six years. He then spent two years in New York City studying at Columbia University.  After completing his studies, he worked in New York for one more year before returning to Paris. Ten years later, in 1978, he moved to the Washington, DC, area and worked for the World Bank. He retired in 2002 and still lives in the area with his wife. His son, daughter-in-law, and two grandchildren live nearby.

Jean-Claude hopes that the Museum will be able to find many of the people whose childhood pictures appear on our site. He has provided us with contact information for three other people whom he has known since childhood and who appear in the pictures on our site: Betty Freund, Léon Kopel, and Esther Silberberg. He has also sent the site address to friends and family in Belgium and France.