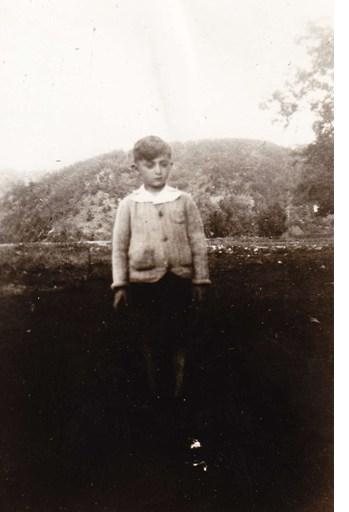 Jean Wasersztrum’s father moved from Poland to France in 1926 and his mother in 1933. After they married they became French citizens. Jean Wasersztrum was born in 1939 and his brother, Serge, in 1943.

Before the war, the family lived in the industrial city of Saint-Etienne, a major center for the manufacture of light weapons and tanks. Jean’s father sold ready-to-wear clothing at outdoor markets with the help of Jean’s aunt and his cousin Maurice. Jean’s mother had dealt in women’s undergarments and stopped working after Jean was born.

During the war, Jean’s parents were stripped of their French citizenship and went to live in the village of Retournac, to the south of Saint-Etienne. Jean’s father kept a warehouse in Saint-Etienne where he kept clothing that he sold periodically in order to support his family. In 1944, Jean’s father went to his warehouse and after being denounced was deported and never seen again.

After liberation, Jean’s mother took over her husband’s business selling ready-made suits at outdoor markets with the help of her sister-in law Ginette. She regained her French citizenship in 1951.

After the war, Jean went to an Oeuvres de Secours aux Enfants (OSE) home in Aix-les-Bains. His brother went to another OSE home. Later, mother and sons were reunited and the boys attended elementary school in Saint-Etienne.

After elementary school, Jean attended a vocational high school in Saint-Etienne where he studied to be an electrician. In 1958, after completing his studies, he moved to Toulouse and worked as an electrician with a company working in rural areas. In 1960 he brought his mother to Toulouse. She opened a store and worked there until she retired in 1972. In 1962, during the war in Algeria, Jean was drafted. He did not go to Algeria, though, because he served in the air force, which was not active there. In 1981 he moved to Paris and started to work in industrial marketing and later switched to real estate. He continues to work in that field. He recently brought his aging mother from Toulouse to live in Paris.

Jean’s younger brother, Serge, became a medical doctor and later a psychiatrist. Today he owns and operates a bookstore in Paris.