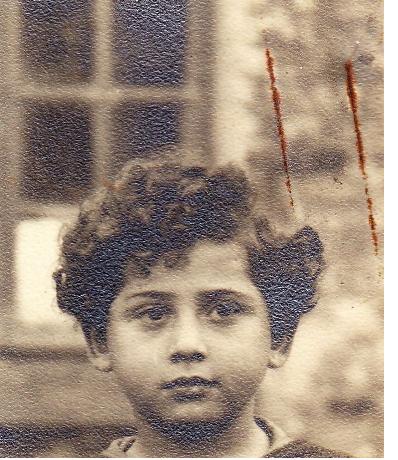 In March 2011, shortly after the Remember Me? project went online, Berta Gardon, a Holocaust survivor now living in Michigan, visited the site. She was struck by one photograph in particular, of Jeanne Altman, and wrote asking for more information. Berta told us that she believed that Jeanne was her cousin. She had never forgotten her face.

After the Anschluss, members of Berta’s family, including her father’s sister Jennie, fled Vienna for Brussels. Jennie was pregnant, and Berta stayed with her in a rented room near where the rest of the family had taken refuge. Berta was arrested once and released, so when the opportunity arose she fled Belgium using some money and a false passport given to her by her sister Greta’s husband. She made her way to France, where she was still in danger. She then made it to Switzerland, where she stayed in relative safety until the end of the war.

After the war, Berta flew back to Belgium to learn what had become of her family. She was reunited with her sister Greta. A relief agency approached the two sisters and asked if they could take care of their young cousin, the daughter her aunt Jennie had given birth to after the family arrived in Brussels. Berta recalls only seeing Jeanne, a “pretty little girl,” once. She and her sister both felt terrible that they could not take care of Jeanne. Greta had lost her husband during the war. The two sisters did not have a home, or money, or even a visa that would allow them to live anywhere. The sisters then lost touch with Jeanne.

Berta always wondered what had happened to her young cousin and was very excited to see her picture on the Remember Me? site. One of our staff members searched our collections and found documentation about Jeanne that confirmed that she was indeed Berta’s cousin. It was not until November 2011, however, that we heard from Jeanne’s daughter, Susan. In March of this year, Susan and her mother, now known as Jeanette Dryer, flew to the United States from England to visit Berta and her family. After Jeanette returned to her home in England, the two cousins both took the time to speak with us about their experiences during the war and about their reunion.

Jeanette was born in 1939 in Belgium. Her parents were Jennie Rost and Oscar Altmann.  She now knows that her parents were taken to Auschwitz from Belgium. Jeanette remembers very little of her early life. She recalls being in an orphanage in Belgium, but has no idea how she got there or who put her there. Berta tells us that after her aunt was arrested, a neighbor gave Jeanette to a convent for the nuns to care for. “There were some good people,” she says, “Just not enough.” After the war, Jeanette’s half-sister Stella (formerly Gisella) found her via the Red Cross and in 1949 brought her to her home in Belfast. Jeanette remembers travelling there from Belgium all by herself: “I remember being on the plane from Belgium. I remember crying.” Jeanette spoke no English then:  “All I could say was ‘Belfast.’”  Stella picked her up from the airport, and Jeanette stayed with her for about a year.

Eventually, in order to ensure that Jeanette was given a proper Jewish upbringing, Stella sent her to an orphanage in London called West Norwood. She lived there from 1950 until around 1954, when she left school and began working. She wanted to be a hairdresser but could not because she couldn’t work on Saturdays. She worked for a time as a machinist in a dress shop before becoming a shop assistant. She worked in retail for the rest of her career. In 1959, Jeanette married Ivor Dryer, who came from a Jewish family. They had three daughters and eventually moved to Devon, where Jeanette still lives. She divorced Ivor after 25 years of marriage and is now retired. Jeanette kept in touch with Stella until her death in 2001, shortly before her 85th birthday.

When her middle daughter, Susan, saw her picture on our site, she shouted at the computer, “That’s my Mum!” Jeanette was in shock and didn’t fully believe it until Susan mailed her a copy of the photo.

When she was younger, Jeanette tells us, she used to hold out the hope that someone would come for her. She has no complaints about West Norwood and says she was treated quite well there. However, she never had the “home bonding” that she would have liked. “All I wanted was a family,” she said.  She eventually gave up that hope and considers herself a “loner.” Nevertheless, she is glad to have had the chance to connect with her cousin Berta.

We provided Susan and Berta with each other’s contact information, and they arranged for Susan and Jeanette to travel to the United States to meet Berta and her family. Susan and Jeanette arrived in March 2012 and stayed for several days. Jeanette brought about a half a dozen photos with her. She had had them for as long as she could remember. Berta was able to identify the people in the photographs for her, and Jeanette gave Berta a picture of her and her sister together. Berta was able to tell Jeanette what her mother had been like. A nurse who loved children, Jennie had longed to have a child of her own. Berta tells us that Jeanette looks just like Jennie.

Both cousins are glad to have found each other and to have been able to meet. Jeanette is grateful to have learned a little bit more about her parents. Still, she says, there is no way that she can fully recover from the losses she suffered at such a young age: “I lost my home and my family unit and nothing can compensate, but it was lucky that [Berta and Greta] were able to get away, but unfortunately my parents didn’t. And that’s how it was for a lot of families.”