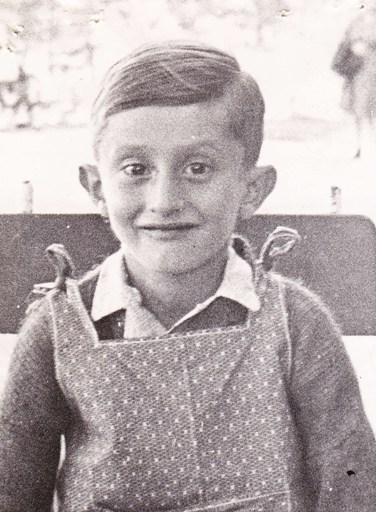 Until recently, Joseph Ambrus believed no photographs of him as a child had survived the war. That was until a printing customer of his wanted to recommend him to a client and conducted a Google search for Joseph’s contact information. To his surprise, Joseph’s Remember Me? profile came up as a result. The client forwarded the photograph to Joseph, who wasn’t certain that the photograph was actually him. He contacted the Museum’s Holocaust Survivors and Victims Resource Center to gain more information. The Resource Center found a postwar World Jewish Congress child questionnaire that confirmed the child in the photograph was indeed Joseph Ambrus.

Joseph was born in Budapest on May 7, 1940. According to the child questionnaire, he lived in the country until the age of three. After his mother’s death from typhoid fever in 1942, he was sent into hiding along with his maternal grandmother. He was hidden by a Christian family who stayed in a house that was protected by the Swiss state during the time of persecution. Joseph and his grandmother remained in hiding until the end of the war. He later found out that his father had been conscripted into the Hungarian Labor Battalions and, according to the child questionnaire, died during deportation on November 21, 1944.

Joseph remembers watching Russian soldiers running around the block to liberate Budapest. He remembers this well because during the war he was not allowed to look out the window. After liberation, Joseph lived in a Jewish orphanage in Buda. He lived there during the week and was allowed to visit his grandmother in Pest on the weekends. Joseph only has flashes of memory tied to his early years in the orphanage.

He stayed in the orphanage until 1952, when his grandmother was killed in a car accident. At the age of 13 he went to live alone in her vacant apartment. Joseph continued to attend school and became very physically active and excelled at canoe racing. At school he witnessed extreme antisemitic behavior. Joseph had practiced Judaism in the orphanage, but after his grandmother died he stopped. He told his classmates that he wasn’t Jewish to fit in better. It took him nearly three decades to accept the Jewish part of his identity.

Joseph left Hungary in 1957 after the Revolution. He left with five of his older canoeing partners. They ended up in Gerovo, a refugee camp in Yugoslavia. The conditions in the camp were miserable, but the canoeing partners stuck together and continued to train. A Hungarian canoeing coach, who coached in Italy, arranged for them to leave Gerovo and come to Italy. Joseph’s friends were all of age and given Canadian visas. Joseph was 16 at the time and as an orphan did not have anyone to give permission for him to leave. He remained in a refugee camp in Rome until the canoeing coach got him a job in a canoeing club house. He was able to race and work for the club with the intent of following his friends to Canada.

After several failed attempts at being seen at the Canadian consulate in Rome, Joseph took matters into his own hands. One day he dressed up “as an American in a Hawaiian shirt” and told the receptionist that he was an old friend of the Canadian consul. It turned out that the consul was a former commodore and canoed for the Lachine canoe club, the same club Joseph’s friends now raced for. The consul granted Joseph a Canadian visa that listed Italian citizenship. Joseph then joined his friends in Canada and continued to train hard for his canoeing club races.

In 1966 Joseph came to the United States. He worked in construction in Rochester, New York, and Chicago before settling in San Francisco. There he started a career selling life insurance and ended up working in the printing business. Joseph explained that growing up without a stable family affects him to this day. Often feeling lonely, he developed his charm and sense of humor to win others’ attention and approval. Joseph continues to work part-time in the printing business and still enjoys canoeing near his home in the San Francisco area.