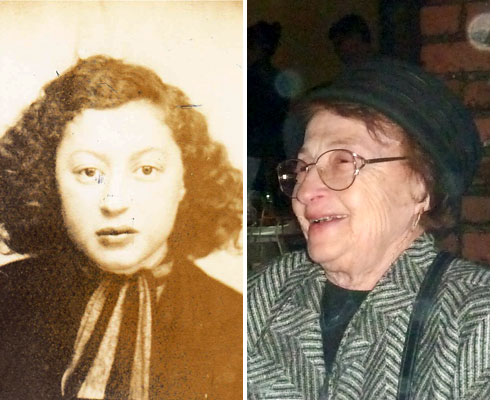 Lea’s father was interned at the camp of Beaune La Rolande from May 14, 1941, until June 27, 1942, when he was deported to Auschwitz. He died in Auschwitz on August 19, 1942. Lea’s mother was interned at the transit camp Drancy from March 16 through March 27, 1944, when she was deported to Auschwitz. It is believed she did not make it through the selection at Auschwitz and perished there as well.

In January 1943, Lea’s mother was very ill. She arranged for Lea and Albert to be cared for at a Jewish orphanage in Paris. They stayed in the orphanage until it was liquidated and all the children were deported to Auschwitz. Lea and Albert managed to escape, and Albert believes they may have been the sole survivors. In April 1943, their mother sent them to live with an aunt who was in hiding in a small village in unoccupied France. They stayed there until the end of the war and returned to Paris a few months after liberation. They lived in Paris with the same aunt and her husband and daughter.

Lea was sponsored by her uncle on her mother’s side of the family and immigrated to Brooklyn, New York, in 1949. She worked for a small company making pocketbooks and attended evening classes to learn English. Lea lived with her uncle and his family in Brooklyn until she married in December 1951. Lea and her late husband, Barry L. Berger, lived in Brooklyn for the first 40 years of their marriage. Barry was also a Holocaust survivor. He was from Chust, Czechoslovakia. They had three sons and one daughter, born between 1953 and 1963. The eldest son died in 1962.

Lea was a stay-at-home mom during the early years of her marriage. Later, when her children were older, she worked as a retail sales clerk at Martin’s in Brooklyn and Gimbel’s in Manhattan. She also worked as an administrative assistant for the City of New York. The Bergers retired and moved to West Orange, New Jersey, in 1997. Barry Berger passed away in 2007. Lea currently resides in New Jersey and has a total of seven grandchildren and four, soon to be five, great-grandchildren.

Lea’s brother, Albert Glicenzstein, and son, Robert Berger, contributed to this description of Lea’s experiences during and after the war.