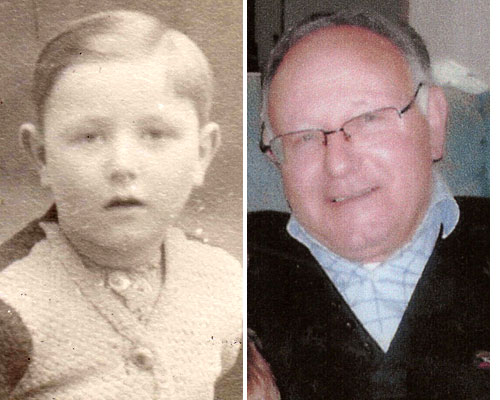 Léon Kopel was born on February 9, 1941, in Valenciennes, France. He does not remember when this photograph was taken but thinks he was five or six years old at the time.

Léon’s parents were from Poland. His father arrived in France in 1925, fleeing antisemitism and pogroms. Léon’s grandmother left Poland for Strasbourg, France, with Léon’s mother in 1913. Léon’s parents got married in 1932. His father was a furrier and had a store in Valenciennes. He also sold furs in markets.

On September 11, 1942, Léon’s father was arrested by a German soldier and a French policeman. He was sent to the camp of Malines, Belgium, and deported to Auschwitz on September 15. He never returned. Léon was too young to remember his father.

Eight days later, Léon and his mother were denounced and arrested. Léon was handed over to one of his mother’s neighbors. Léon’s mother was then freed thanks to someone who assured the authorities that she was French.

At the end of September, Léon’s mother decided to find refuge in Normandy, in Bonnebosq, near Lisieux. She rented a small house from a farmer, Mrs. Blanchet. She and Léon remained there until D-Day.

Léon recalls that Abbot Baley and his governess, Miss Renouf, were helpful to them. Léon considered her his godmother and spent some holidays with her after the war and before he turned 12 or 13.

When Léon and his mother returned to Valenciennes, their house and the family business had been taken over by others. It took Léon’s mother several years to get her properties back.

Léon went back to school and later attended furrier school in Paris. After 24 months in the army, he returned to Valenciennes to help his mother with the fur shop.

In 1971, Léon took over running the shop from his mother. He married in 1968 and has three children and three grandchildren.