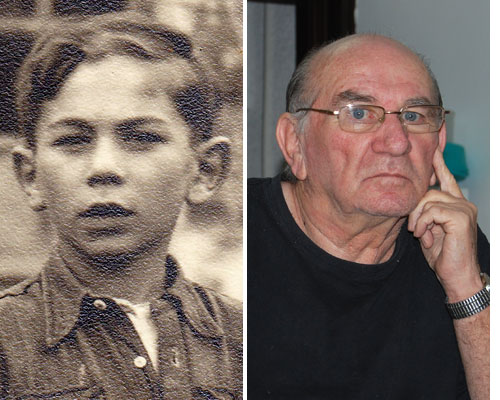 Léon Sad’s cousin, Celine Jelen, one of the Remember Me? project’s children, told Léon and his wife about the project. He was so excited to see his picture on the Museum’s Web site that he started crying.

Léon, who uses the name Yehudah in Hebrew, was born on February 1, 1937, in Brussels to Ruchla (b. 1911) and Nisan Avraham Sad (b. 1908). His parents had been married in Kalisz, Poland, and moved to Belgium in the late ’20s or early ’30s. His mother was deported to Auschwitz on Transport 15 from Malines and perished. His father was in forced labor camps in France during the war and survived.

Léon was placed in hiding by his paternal grandmother or an aunt at the request of his mother who he thinks realized what would happen to the Jews in Belgium. He lost a younger brother to hunger but does not know the details. Léon lived with a caring Christian family in a small village in Belgium where another boy by the name of Simon was hidden. He does not know his last name and would very much like to locate him. As far as he knows, the family was paid for hiding him. He does not know the name of the family so he did not keep in touch with them and regrets that very much.

After the war his father came to get him, but at the advice of his grandmother, they were reunited gradually so as not to upset Léon, who was used to living with the Christian family. His grandmother and aunt survived the war in Brussels (the grandmother in an old age home). Léon’s aunt, Nadya Sad, took care of him like a mother and visited him at least once every year after he moved to Israel.

Léon moved to Israel in 1949 with his father and stepmother and was placed in Kibbutz Ruhama in the Negev, where he has been living ever since. He married Tamar Nahid in 1960, and they have four children and 10 grandchildren. Only the youngest daughter, Yael, lives in the kibbutz with her family.

Léon knows very little about his roots, because his father returned to Belgium after living in Israel for seven years and seldom spoke to him about the past. He invites anyone who might know the family that hid him or who might have information about his father’s experiences during the war to contact the Museum.