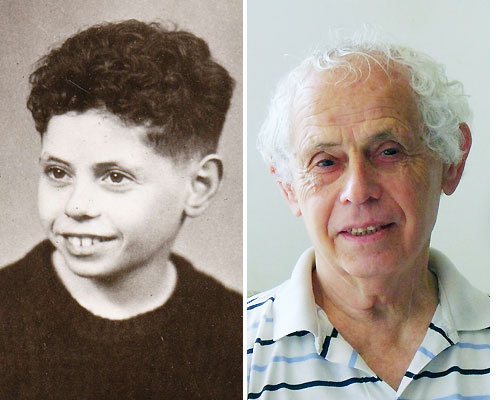 Lucien Berkowicz was born in Paris on April 21, 1935, to Tauba (née Burstein) and Mayer Berkowicz. His younger brother, René, was born a year and a half later. Tauba left Poland because of her political activities and arrived in Paris to join her older brother, Eli, who had left Poland several years earlier to avoid joining the Polish army. Mayer left Poland for the same reason as Eli. He had the opportunity to sail on a merchant ship to Le Havre where he left the ship. He lived for several years illegally in France, learned French, and was then permitted to stay in France. He was a carpenter trained at an Obshchestvo Remeslennogo Truda (ORT) school in Poland and eventually had his own shop in Paris. When World War II broke out the family lived at 68 rue de Charenton in a two-room apartment.

The family was arrested on July 31, 1942, and the parents were deported to Drancy and from there to Auschwitz. The boys were taken off the Gestapo truck and placed first at an orphanage on rue Lamarck. Miry Lustig was a volunteer at that children’s home, and she was the person who accepted them at the orphanage. René was hit in the head when playing and was taken to a hospital. Meanwhile one day a group of about ten to 12 children, including Lucien, went on a trip in the streets of Paris and instead of returning to the orphanage were accepted at the Guy Patin orphanage. Both places were run by the Union générale des israélites de France (UGIF), so the Nazis had free access there and from time to time searched for older children to send to concentration camps. Since René was not at Guy Patin, Lucien begged again and again that the management bring his brother so they would be together; after about a month, René joined his older brother. In 2000, Miry Lustig went to Israel and contacted the brothers. She remembered them very well–René the blonde and Lucien the chestnut haired. She had been a volunteer at the Lamarck orphanage during the war and also at other Jewish institutions. When she met them she gave them some documents and photographs from the war years.

The two brothers remained at Guy Patin until mid-January 1943. One night Lucien woke up quite early in the morning because he was very hungry and went to the kitchen to look for something to eat. He was amazed to find two young women and about ten children in the kitchen. When he appeared the two women were surprised, and one of them told Lucien that they were leaving Guy Patin and asked if he wanted to join them. Lucien responded positively but said that he had a younger brother upstairs and wanted him to come along. One of the women went with him to wake up René. The whole group, including René and Lucien, left Guy Patin at twilight. Lucien and René eventually were taken to the small village of Savigny-le-Vieux, near the town Sainte-Hilaire-de-Harcouët in Normandy, where each was placed with a different family. René was moved from the family with whom he stayed at first to another one, and Lucien lived with the Blondels until he left the village in June 1945. He has been in contact with the family’s son and granddaughter frequently since the end of the war.

After the war, as French orphans, René and Lucien spent about a month in a children’s home and then were sent with 100 other children for a month’s “vacation” in the Black Forest (Schwarzwald) region to recuperate. Their aunt, the wife of their uncle Eli, their mother’s oldest brother, came to pick them up from there. They stayed with her family in Clermont-Ferrand in the south of France for four months. Because of limited financial means, since the uncle’s family had two children of their own, they were placed in February 1946 at the Oeuvre de Protection des Enfants Juifs (OPEJ) orphanage Le Vieux Phare in Malmaison. A half-year later, René was moved to the OPEJ orphanage at avenue Josephine. About half a year after the brothers were put under the care of OPEJ, their uncle’s family moved to Paris to a nice house in the Vincennes neighborhood. Every month or six weeks, the two boys went to visit them.

During that period, their aunt, Miriam, in Israel, the younger sister of their mother, and one of their brothers, Dov, who managed miraculously to escape from a concentration camp and had immigrated to Palestine just after the war, decided that their sister’s orphaned children should live in Israel. In the OPEJ orphanages they learned some Hebrew from a teacher, Mr. Horowitz, who also gave them their Hebrew names. Eli was reluctant at first, but finally he agreed to let the children immigrate to Israel; about a decade later, he and his family settled in Israel as well.

The brothers set out for Israel in December 1948 with a group of orphans. They were first sent to Marseilles where at night they boarded the Pan York. They arrived in Israel during the holiday of Hanukah and were taken to a camp for newcomers in Kiryat Shmuel. There their uncle Dov picked them up and placed them temporarily in an orphanage in Kfar Saba. Lucien next lived in Kibbutz Tel Yosef, where there were quite a few children from France. Later he joined a group in Kibbutz Ma’agan and they all went to the Nahal program in the army. René went to another kibbutz.

After completing his army service, Lucien, who took the Hebrew name Arie, decided to pursue university studies. Since he had not finished either primary school or secondary school, he struggled to make a living while getting the education that would enable him to be accepted at a university. He eventually passed all the necessary exams and studied mathematics at Tel Aviv University. For his master’s degree he studied mathematics at the Weitzman Institute and computer science at the Technion in Haifa.  While at the Weitzman Institute he met Nili, his wife-to-be. They were married in 1958, and then Arie changed his last name to Biron. He and his wife, Nili, have five children, and they are very proud of each of them and their accomplishments.

Arie was one of the earliest computer experts in Israel and eventually had his own company. He and his wife moved from central Israel to Misgav in the north in order to be near his wife’s nephew after her brother was killed during the Yom Kippur war. He has written a thoroughly researched memoir that includes extensive documentation on his family’s background and fate during the war.

Arie’s daughter, Yael, went to France to represent him at the reunion of the children who were hidden in the village of Savigny-le-Vieux in Normandy and for a ceremony that took place on May 28, 2011. A plaque was posted honoring the central village in an area where about 30 children, with six sets of siblings among them, were hidden during the war. She delivered Arie’s moving speech in which he thanked the righteous families to whom he said they owed “nothing less than their lives.” (A video about the ceremony is available at //www.youtube.com/watch?v=bAsF5dk_9UU )

This was a very important event for Lucien and René because they had tried to get the villagers recognized as Righteous Among the Nations by Yad Vashem in the 1980s, but were disappointed when told that only individuals not groups were given the honor. Now they feel that an appropriate recognition has finally been given to those who saved the children during the war.