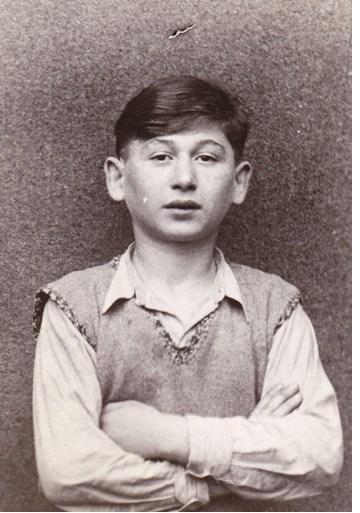 Marcel Chojnacki first heard about the Remember Me? project from a member of the Montreal Holocaust Memorial Centre. Despite having seen this photo before, he “was shocked to see it after almost 70 years or so.” He believes the photo was taken at the Wezembeek orphanage in Belgium. Marcel remembers being taken from this orphanage on October 30, 1942, by members of the Gestapo. All the children and staff of the orphanage were taken to the Malines (Mechelen) transit camp in Belgium. Queen Elisabeth of Belgium intervened and was able to have the children and staff released. Marcel remembers the director of the Wezembeek orphanage, Madame Blum-Albert, saying fondly that “she ran the orphanage almost like a kibbutz; there was much singing and dancing. We tried to forget the outside world.”

Marcel was born on March 2, 1932, in Brussels, Belgium, to Mayer and Rachel Chojnacki. His parents, one brother, and two sisters were deported from Malines to Auschwitz, where they perished. After they were at the orphanage, Marcel and two other brothers, Jakob and Israel, remained in hiding at a convent in Louvain until they were liberated. After the war, the three brothers eventually arrived in Canada on December 20, 1947, aboard the SS Aquitaine. He remembers the rough journey and most of the other children and passengers being seasick.  After arriving in Canada they went to a children’s center on Markham Street in Toronto sponsored by the Canadian Jewish Congress. Marcel remembers vividly when a famous visitor came to the center. According to Marcel, Paul “Robey” Robeson, the American actor, singer, and athlete, stayed with the children one night in early 1948 because he was unable to find a vacancy in a hotel. Marcel even had his picture taken with the international star, but he has since misplaced the photo.

When Marcel saw the film The Red Shoes in a theater in Toronto, he “was most impressed with the shoemaker” in the film and said to himself, “That’s what I want.” This was the beginning of Marcel’s international career as a professional ballet dancer. He danced with the National Ballet of Canada and the Royal Ballet in London, England. He also received a bachelor of arts and a bachelor of science from the University of Montreal. Marcel taught physical education classes in and around Montreal for 25 years. He and his wife raised three children and have two grandchildren.

Marcel still teaches and performs dance.  He also plays the violin with an orchestra.