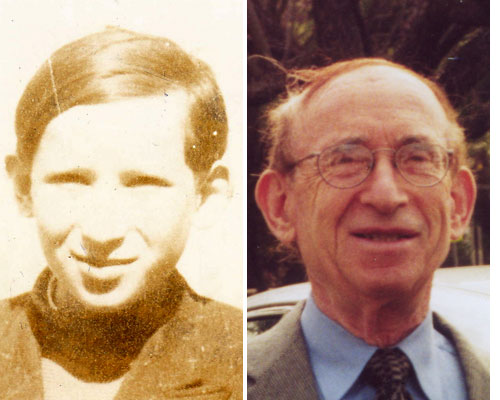 Marcel Kozuch was born in Paris. His mother, Esther, died of tuberculosis when he was four. She, his father, Simon, and his two brothers, Juda and Israel, had emigrated from Poland a few years earlier. When World War II started, Marcel was living in Paris with his stepmother, Esther Zylbersztajn, his father, and his two brothers. After the armistice, as France was divided into a German-occupied zone and a free zone, antisemitic laws were issued and roundups of Jewish people were initiated in the occupied zone.

Early on, Marcel’s middle brother, Israel, left Paris to join an uncle, his father’s brother, Abram, who had taken refuge in the free zone. At a particular Paris roundup, Marcel, then nine years old, was arrested along with his stepmother; he was soon released but his stepmother was taken in by the police and eventually deported. Marcel’s father and oldest brother, Juda, had gone into hiding; when they attempted to flee to the free zone, they were arrested trying to cross the border and were later deported. Marcel managed to escape to the free zone to join his uncle. He lived with his uncle for a few months, but when the German troops occupied the whole of France, Marcel was placed with the Eclaireurs israélites de France (EIF), a Jewish scouting organization that had taken in and was housing a number of Jewish children. Marcel stayed with them for a number of months.

As the situation in France deteriorated, Marcel Kozuch was given the false name Marcel Charnier and sent to live with a Christian family, the Chifflets, until the end of the war. Marcel recounts that in a sense this part of his time during the war felt like a normal life for a child. After liberation he was reunited with his brother, Israel, who had been able to escape France for Spain during the war. The brothers were forced to go through the process of reclaiming their Paris apartment; they took the apartment back and lived there while Marcel attended high school.

In 1949, both Marcel and Israel (now Jack) immigrated to the United States and went to live with their mother’s sister, Jennie Copito, a resident of New York. Marcel completed high school at a French school in New York City. He attended the City College of New York part-time, but in 1951 he was drafted into the U.S. Army. As part of his tour of duty he served in the military occupation of Germany. After his two-year service, Marcel went back to school full-time for a bachelor’s degree in electrical engineering. During this time he met his wife, Gladys, a graduate of Hunter College of the City of New York. They married in 1957 after he graduated. Marcel and his wife soon moved to New Jersey, where he worked as an electrical engineer. In addition, he went on to acquire a master’s degree from Stevens Institute of Technology. They raised two children, a girl and a boy, who both studied and earned bachelor’s degrees at Syracuse University. Their daughter, Lydia Hassan, is now an artist and art teacher; their son, Stephen, is a financial consultant and retirement planning specialist. They are both married and have a total of four children. Marcel and Gladys are now retired.

Marcel has stayed in touch with the family who kept him hidden during the war. He has seen them on trips back to France or when the family members traveled to the United States.