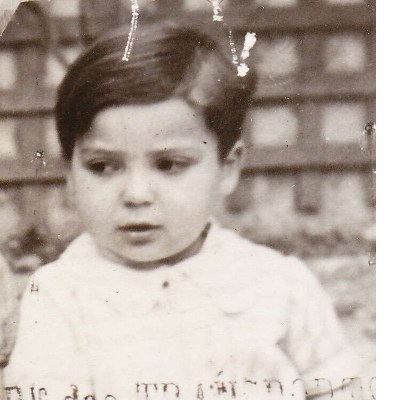 Marcel Probstein was born in the Pletzel, the Jewish ghetto of Paris, on June 5, 1942. His parents were Hinda Baila Klajner Probstein (born June 26, 1907), from Wiskitki, Poland, and Szaja Probstein (born August 23,1894), who was born in Przemysl. Szaja came from a large family, all of whom perished in the Holocaust. Marcel’s mother arrived in Paris in 1926, where she met and married his father.

On July 16, 1942, when Marcel was six weeks old and his siblings, Regine, a year and a half old, and Paul, three years old, their father was arrested and sent to Drancy. From there he was deported to Auschwitz on Transport 11 on July 27, 1942, and perished, according to ITS documentation, on October 22, 1942. The family remained in Paris until 1943.

With her three small children, Hinda escaped from the occupied area to southern France. She lived in Toulouse from 1943 through 1946 under an assumed identity of a non-Jewish Pole (named Lepziniak). Marcel believes that a French policeman encouraged his mother to flee Paris with her children and thus saved their lives. Hinda managed to place the two older children with a Christian family in the village of Pont-en-Royans with the help of the Women’s International Zionist Organization (WIZO) or the Hebrew Immigrant Aid Society (HIAS). Marcel remained with his mother while she worked on farms and visited her older children whenever possible.

After the war, the children were in various orphanages, sometimes together and sometimes separately. Marcel was in an orphanage in Villejuif operated by L’Oeuvre de Protection des Enfants Juifs (OPEJ) from 1946 through 1947. Then, in 1948, all three children lived in an orphanage operated by L’Oeuvre de Secours aux Enfants (OSE) in Henonville. They then spent January through August of 1949 with a Catholic family in Saint-Pierre-de-Chartreuse. From 1949 through 1956, the children were in an OSE orphanage in Chateau de Vaucelles in Taverny. Finally, until 1958, they were in the OSE orphanage in Versailles.

Marcel served in the French air force for four years. In 1965 he moved to Israel with his mother because she wanted to be close to Regine, who had immigrated to Israel in 1959. Her second son, Paul, had come to Israel and served in the Israeli army between 1957 and 1960. Paul returned to France and lived there for several years, but he finally settled in Israel permanently in 1966. He has been abroad serving as a foreign representative for Israel; Marcel and his niece have scant contact with him.

When Marcel moved to Israel, he joined the Israeli air force and managed a large electro-optical laboratory for thirty years. He continues to volunteer there and lives now in Rishon LeZion. Marcel gradually distanced himself from Judaism. He considers himself a Francophile and speaks French with his brother and his Algerian friends. He reads books in French, watches French movies, and loves France in general.

Marcel grew up with Claude Rosenthal, who is still a very good friend and who is very active in OSE. He visits Israel regularly, and he and Marcel always get together during these trips.

Marcel’s mother, Hinda, died at the age of 99 in May 2006 after enjoying her life in the Haifa area of Israel. Hinda’s sister, Sarah Klajner, had six or seven children and lived in the United States; Marcel’s family lost contact with her. His father had a sister, Hanah Probstein, who survived the Holocaust and lived in Israel until she was more than ninety years old.