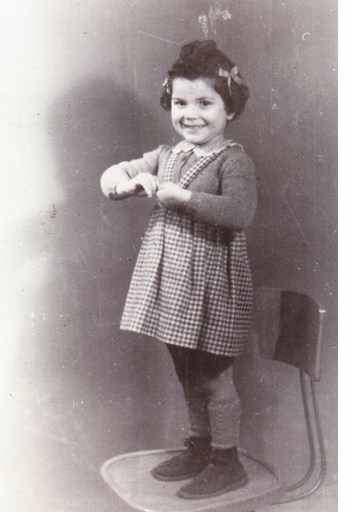 As soon as Marina Del Monte’s son showed her this picture, she recognized herself. She can’t remember when the photograph was taken, but it had been in her mother's house for years.

Marina was born in Rome on November 4, 1942, to Jewish parents Giuseppe Del Monte and Clara Limentani. She was their only child.

Giuseppe worked as a salesclerk at an interior decoration store in Rome. It was a large and prestigious establishment, owned by an uncle. Despite the Fascist dictatorship, the war, and racial legislation, the family did not lose hope.

Before Marina's first birthday, however, Italy surrendered to the Allied Army and the Germans quickly invaded the country from north. Knowing that they were in danger, the family fled their home and went into hiding. Later, Marina’s mother told her that the nuns of a convent in the suburbs of Rome hid them together with an aunt and her children. Still, Giuseppe went to work everyday at his uncle's store.

On March 7, 1944, SS men entered the shop; they were looking for the owner, knowing he was Jewish. He had already left Rome, hiding with his family far from the city. Another clerk betrayed Giuseppe. He told the SS that Giuseppe was a relative of the owner and a Jew himself. Giuseppe was arrested and put in Regina Coeli, a prison. He was almost certainly doomed to deportation to Auschwitz, but before a convoy was organized, a new development sealed his fate.

On March 23, 1944, the Italian resistance detonated a bomb as a police column was passing in via Rasella. By the following morning, thirty-three German policemen were dead.

The Wehrmacht commandant in Rome and the SS Lieutenant Colonel, Herbert Kappler, agreed on a reprisal action in which ten Italian civilians would be shot for each policeman killed in the guerilla action. They suggested the potential victims be drawn from individuals already condemned to death. However, only seven prisoners were awaiting execution in Roman jails, and to reach the required quota, the Nazis summoned prisoners awaiting their trials and 75 Jews from the Regina Coeli prison. Giuseppe was one of them. Only after the infamous attack—later known as the Ardeatine Caves massacre—had taken place did the SS inform the population of the terms of the reprisal.

Now alone, Marina and her mother remained in the convent until the end of the war. They then lived together with Clara's sister and the cousins.

Marina went to an Italian public school until she was twelve. Because of the difficult economic situation, she could neither study further nor attend a Jewish school, so she started working as a saleswoman in a shop.

Clara died when Marina was just sixteen. A few years later, the aunt she grew up with died as well, leaving Marina alone in the world.

She married very young and started working with her husband. Together, they managed a wholesale store that sold children’s clothing. They worked hard at the same time that they were raising two sons. They had the joy of having four grandchildren. Marina's husband died in 2011.