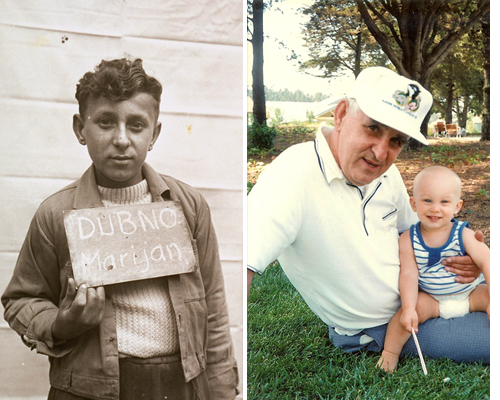 After learning that Marijan Dubno had passed away in 1989, a museum volunteer was able to locate his daughter Ava. We are grateful to Ava for sharing with us what she knew about her father’s life during World War II and his life afterward in the United States.

Marijan was my father’s name,but we always knew him as Marian. He frequently spoke of his life during the war and told us many stories of his time in Germany.  It was not until I was contacted and read the information on him, however, that I realized just how difficult life for him must have been.

He was born in 1930 in the village of Zolochev in what is now Ukraine. In 1941, when my father was 11, the Germans invaded and he and his family lived under their occupation until 1944. During this period both of his parents were killed and he was eventually takento Germany to work in the slave labor camps. While there he was moved from camp to camp and ultimately was liberated by the Americans in 1945, when he was 15. After liberation, he wandered among the refugee camps that proliferated after the war and, as he passed through them, he would get to know the displaced persons who lived there.  Many times, when they discovered he would be traveling to another camp, they would give him messages in the hope he might find their missing friends or relatives. When he succeeded he was rewarded with food and in this way he managed to survive. During this time he became proficient in several languages and in addition to his native Ukrainian spoke: German, Russian, Polish, English, and Czech. His knack for languages would serve him well later in life. In spite of what happened to my father he loved helping people and would often say reuniting lost family members was the most rewarding timein his life.

Eventually he found his way to the Kloster Indersdorf displaced persons camp for youth. When officials there were unable to locate any living relatives in Europe, he was sent to New York, at the age of 17, to be reunited with an uncle. He worked in his uncle’s shoe factory for several years and, in part to repay the kindness of the Americans who had liberated him, he enlisted in the army and was sent to Korea. I remember a story my father told me of when he was about to disembark from a plane with his fellow soldiers to go to the front line. At the last minute he was told he would not be joining them. They needed a translator and his ability to speak Russian resulted in him spending the remainder of his tour in the military police—even though he was only five foot five and weighed 120 pounds. He would often say, “After what I went through in Germany, that was a piece of cake.”He obtained the rank of corporal and after the Korean War ended was stationed in Germany to serve out the remainder of his military service.While there he met and married my mother, who was also a war refugee, and after he was discharged they moved to America and settled in the San Francisco Bay Area. My father worked hard and opened his own gas station in Berkeley, California. During that time he also served as a reserve police officer with the Berkeley Police Department.

The war definitely impacted my father’s life. In his youth, he really didn’t have a family, and the skills that helped him to survive during World War II may not have always best served him in his life afterward. In this way he may have been like many Holocaust victims, a survivor without all the tools for happiness. But in spite of this my father led a full life and, some would argue, lived the American dream. He loved, married, had children and grandchildren, and was loved by others. In his later years he became very active with his church and brought much joy to those to whom he ministered. He died at 59, and is buried in the National Memorial Cemetery of the Pacific in Honolulu, Hawaii. We miss him.