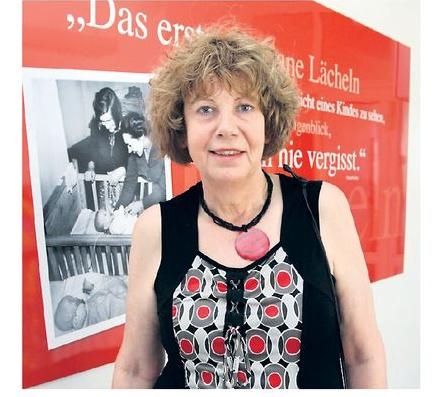 Anna Andlauer spent over 15 years as a volunteer guide at the Dachau Memorial Site. During that time, she was in contact with many survivors from the camp and interviewed several for stories in local newspapers. She had never given much thought to the survivors’ lives after liberation until she met Michael Walter, a child survivor who had spent time at Kloster Indersdorf.

A few years after that encounter, Anna learned of the Greta Fischer papers held by the United States Holocaust Memorial Museum. She was amazed by both the papers themselves and the photographs that were part of the same collection, many of which are on the Remember Me? site. Since 2007 Anna has conducted extensive research about Kloster Indersdorf and the fate of the people who lived there during and after the Holocaust. In 2011, she published a book on the postwar history of the place, Zurück ins Leben: Das internationale Kinderzentrum Kloster Indersdorf 1945-46 (Nürnberg: Antogo Verlag, 2011), which can soon be read in English as an eBook, The Rage to Live: The International D.P. Children’s Center Kloster Indersdorf, 1945-1946.

One of Anna’s first projects related to Kloster Indersdorf entailed having her art students create grave markers for infants who had died during the war at the infamous “nursery” (Kinderbaracke) for the children of forced laborers. A ceremony was held in which students shared what they knew about the child whose markers they had made. Staff members from Indersdorf’s town hall now maintain the grave markers, and local residents sometimes leave flowers in the cemetery.

Anna began her search for Kloster Indersdorf survivors by focusing on Jewish children but has since expanded her search. She has now found more than 50 of them, including a few non-Jewish survivors in France and Poland and many Jewish survivors, who live in Israel, the United States, Canada, Brazil, Belgium, and England. Only one of the people she has contacted has asked to be left alone because it was too painful to remember his past. The rest were happy to share their memories. Through her work, Anna has been able to reunite friends such as Walter Hahn and the late Hans Neumann, who had not seen each other since shortly after the end of the war. In addition to her extensive contacts with Kloster Indersdorf survivors, Anna has undertaken research at archives in New York, London, Bad Arolsen, and Jerusalem. Her book is based on this work.

Since July 2008, Anna has organized reunions at Indersdorf for the survivors. She tells us that those who come to the reunions are eager to do so and welcome the chance to see each other and speak to school children in the area, including some whose classrooms are located in the dormitories in which the survivors lived. They especially value the opportunity to show their families the place where they had spent such an important part of their lives. The fifth reunion will take place in July 2012, and Anna is continuing her search for non-Jewish survivors who returned to Poland after the war.

Anna is highly regarded for her work related to Kloster Indersdorf and the expertise that she has acquired as a result. In 2008 and 2009, she travelled to Jerusalem for events marking Greta Fischer’s 99th and 100th birthdays, and news stories about her visit helped to put her in contact with some survivors in Israel. In May 2011, a school in Dachau was renamed in honor of Greta Fischer, and Anna played a key role in organizing activities connected to the ceremony.

Anna has helped us a great deal with the Remember Me? project, and we are pleased to say that we have put her in contact with a few more Kloster Indersdorf children. She recognizes the importance of documenting these survivors’ memories while they are still living. She notes with approval that we include pictures of both Jewish and non-Jewish children who were victims of the Nazis, adding, “This seems to be unique.” She tells us that one of the most important lessons to learn from Kloster Indersdorf and the postwar experiences of displaced children is: “You can’t undo or change what these children had to go through, but it was important for them to experience people who cared for them and created a loving environment for them right after liberation.”