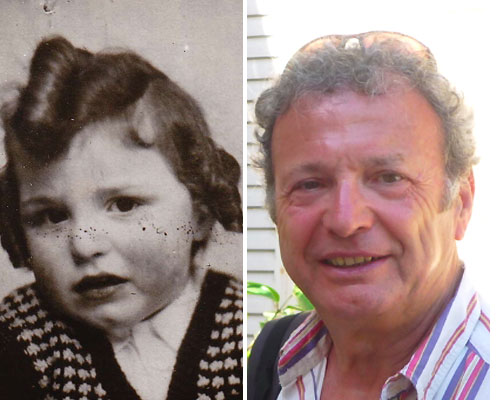 Michel Sztulzaft was surprised and very moved when he saw himself in this picture. He hadn’t previously known of its existence. He recognized himself right away and noted that he did not look happy. He might have been three or four years old when the photo was taken. He also recognized his sister Hélène’s picture.

Michel’s father, Abram, came to France from Poland in 1922 to marry a woman there. His father had two children, Marcel and Hélène, with his first wife. Marcel was denounced in 1944, deported to Auschwitz on Convoy 68, and murdered the day before his 17th birthday. After Abram’s first wife died, he decided to marry Flora, an old school friend from Poland with whom he corresponded. Flora came to France to marry Abram.

The Sztulzaft family lived in the 15tharrondissement in Paris, ten minutes away from the Vel' d’Hiv stadium. Unlike some neighborhoods in Paris, the 15tharrondissement did not have a large Jewish population. The Sztulzafts were the only Jewish family out of 11 in their building. In July 1942, during the big roundup of the Vel' d’Hiv, two policemen came to the Sztulzaft family and told them that they would be back within two hours. Abram sent his daughter to a neighbor’s apartment. Marcel was not with them. When the policemen came back, Michel’s parents were arrested and transported to the Vel' d’Hiv.

Mr. Lagarde was a policeman who lived in the same building as the Sztulzaft family. When he came home that day, his neighbors told him what had happened. Still wearing his uniform, he ran to the Vel' d’Hiv and told the policemen that Flora Sztulzaft was pregnant and French (only foreign Jews were supposed to be arrested that day). She was, of course, not French, but this person saved her, and she was able to go back home with him.

Abram spent four days at the Vel' d’Hiv and was then transferred to the French internment camp Pithiviers. He was later deported to Auschwitz on Convoy 13. He never returned.

Flora decided to remain in their apartment until Michel’s birth on December 6, 1942. She then  hid in Vésinet, and was next hidden by nuns in Saint-Maurice, a suburb of Paris, where she remained until the end of the war. She waited until May 8, 1945, to return to the apartment in the 15tharrondissement.

During the war, Michel was hidden with his mother. Afterwards, though, he spent several years in different children’s homes of the Oeuvre de Secours aux Enfants (OSE) and of the Commission Centrale de l'Enfance (CCE). The CCE children’s homes were located in Andrésy and Le Raincy. His memories of that period are not cheerful. He said the staff at the homes were not trained to deal with the kind of trauma they confronted, but they did their best. After the war, Flora kept going to the Hôtel Lutetia, where survivors returned and lists of survivors were posted. There, she hoped to see her husband. With the exception of a nephew who fought in Lodz, Flora’s entire family in Poland was exterminated.

In 1950, Michel returned to live with his mother. He was a difficult child and she enrolled him in an apprenticeship program in the army, where he learned to be an aeronautical electrician. He never joined the army. He was not really happy during these years. Michel eventually married and had a son and a daughter. Unhappy with his job, he made a radical change in 1969 and began working as a special educator. In 1976, he obtained a Maîtrise d’Animation Socio-culturelle.

Marcel says that he never thought of himself as Jewish, but when his mother passed away, he wanted to share his story. He gave the Mémorial de la Shoah photographs and two letters that his father wrote to his mother, one from the Vel d’Hiv, the other from Pithiviers.

Michel says, “I represent a small piece of French history that is nothing to brag about, but I am not into being a victim.” He would like Mr. Lagarde to be recognized by Yad Vashem as a Righteous among the Nations for saving his mother.