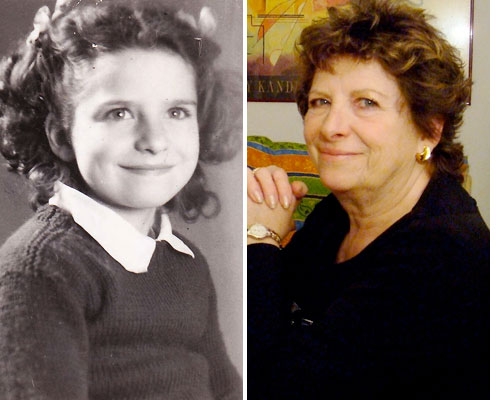 Meir and Mina Zauberman raised their family in the 11th arrondissement in Paris, where there were many Jewish families. They had five children and Meir supported his family as a varnisher in a woodwork factory. Their daughter Micheline is pictured on the Remember Me? site. Born in 1938, Micheline has somewhat vague and detached memories of the years before and during the Holocaust. We spoke with Micheline as well as her sister Jacqueline. Jacqueline, who was older at the time of the war and has a strong interest in her family’s history, was able to provide additional details about the impact of the war on herself, her brothers and sisters, and her parents. Their other siblings include Jacques, now 90 years old, and Henri and Hélène, both deceased.

Shortly after the German invasion of France, Micheline’s father joined the underground. He was part of the Main d’ouevre immigreé (Immigrant Labor), which had ties to the French Communist Party and consisted mainly of foreign-born Jews. In 1941, he was captured by the Germans and shot at Mont Valérien. Micheline has no memories of her father. She does have photographs of him and recalls visiting his grave.

Micheline’s brother Henri was likewise involved in resistance activities. He joined the Maquis and fought in Provence during the war. The family never learned that Jews like Micheline’s parents, who were naturalized after 1930, lost their French citizenship and became foreign or stateless Jews at a time when non-French Jews were the first to be rounded up and deported starting in 1941. In addition, the family was never informed after the war that its naturalization had been reinstated. When Jacqueline tried to obtain documentation of the family’s status, she was told that the papers are kept in an office in Fontainebleau and that the office where they are stored is awaiting asbestos abatement. Jacqueline does not expect to have access to these papers in her lifetime.

During the war, Jacqueline was hidden in a convent while Micheline stayed with a family in a château in a village near Falaise in Normandy. There was a school and a church in the village. Micheline tells us she had friends, dolls, and enough to eat. Her mother came to visit her and at one point had to refuse a doctor’s request to adopt Micheline. She also remembers her aunt coming to visit and giving her a watch with hands that moved. Micheline also has a few memories of the war that was raging all around her. At one point, she and the family that had taken her in fled to hide in the woods and in trenches while the Allies battled the Germans. When they returned to their farmhouse, everything was in disorder. Mattresses had been cut open, and there were feathers everywhere, some still in the air when they entered.

After the war, Micheline spent time in a children’s camp run by the Oeuvre des Secours aux Enfants (OSE). She had an American godmother who sent her packages with peanut butter and clothing. Like all the other children under OSE’s care, Micheline was given a coat of rabbit fur to wear. In the summer of 1945, she returned to Paris, but her mother did not have enough money to feed the whole family. Micheline was sent to stay with an aunt in Belgium. She stayed with her in Schaerbeek, part of Brussels, until she was 12 or 13 years old. Micheline’s aunt showered her with gifts. They went regularly to restaurants and she was always well dressed with a coat and gloves. When she returned to Paris, she began studying at the Collège St. Ambroise. Micheline didn’t enjoy studying, but she liked technical work; the headmistress encouraged her interests and appointed her head of the school printing press. She finished her schooling Paris at the age of 14 and began making buttonholes in a factory run by her brother-in-law. She worked there for four years. Finding life with her mother ever more difficult, Micheline grew very close to her eldest sister, Hélène, who became a second mother to her.

At the age of 17, Micheline married a Frenchman of Turkish origin who had been cared for by the OSE before being sent to Turkey for safety. After they married, he studied at night at the Centre National de la Recherche Scientifique and eventually obtained a PhD. They have two children and two grandchildren. The whole family lives in Antibes on the French Riviera, where they have been for the past 15 years. Micheline’s brother Jacques has two daughters, and her brother Henri left five children. Among the younger generation, most of her family members married Catholics except for one woman whose husband is an observant Jew.