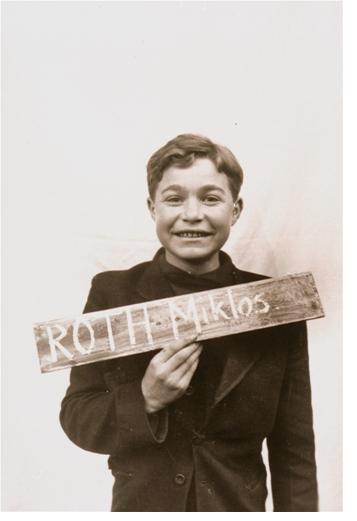 Miklos Roth, later known as Michael, came from a family of Hungarian Jews. His older brother, Sandor, escaped to Palestine prior to the Nazi takeover of Hungary. His mother, Regina (née Weinberger), his sister, Ibolya, and brothers Tibor and Imre were murdered upon arrival at Auschwitz in 1944. His father, Meynhart, died on a death march in March or April 1945. In May 1946, Miklos emigrated to the United States to live with his aunt Freida. He served in the U.S. Marine Corps and graduated from college. He spent many years in retail management and then worked in real estate.  He kept in touch with several of the boys he met while he was at Kloster Indersdorf. He attended a reunion of Kloster Indersdorf children and appeared in a documentary about them. Michael Roth passed away on February 24, 2011. His relatives remember him as generous, warm-hearted, self-reliant, and resilient.