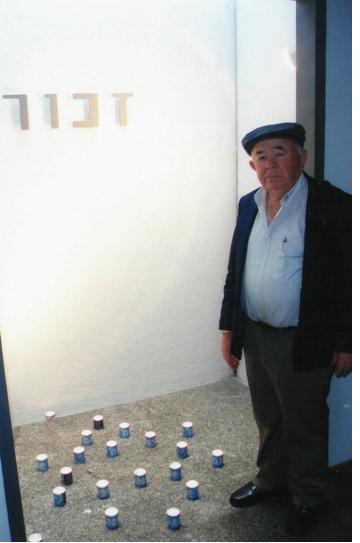 Blima Lorber came across Naftaly Sztajnberg’s photograph on the Remember Me? website. Naftaly says that the picture was taken at Indersdorf, Germany, in October 1945. He has a copy of this photo and recently donated it to the Holocaust museum in Curitiba, Brazil, where he now lives. Upon learning of the Remember Me? project, he immediately told Blima his personal history so that she could share it with us.

Naftaly was born in Sosnowiec, Poland, on November 30, 1922. He was the son of Fischel and Kalya (née Weisstuch) and had two brothers: Isaak, who was older, and Josef, who was younger. Naftaly’s family lived in the city before the war began and were quite poor. In 1940, Fischel, Isaak, and Naftaly were sent by the Judenrat to work for the Germans. They were taken to the work camp Brande, where until 1941 they worked on road construction under the constant surveillance of the SA.

From there Naftaly was taken alone to another camp, Johannsdorf, where he also worked on road construction. He stayed there until April 1942, when he was sent to Blechhammer to work for the company Schreck. In October 1942, many people there fell ill, and he was taken to Gräditz, where he worked again for a construction company under the control of the army and the SA.

Naftaly remained there until the end of 1943, when he was sent to Markstädt. In April 1944, he was taken to Fünfeichen, a subcamp of Gross-Rosen, where he was prisoner number 25675, to work again in construction, and in January 1945 he arrived at Buchenwald, where he was prisoner number 129393. He was summoned to work in the subcamp Altenburg, where there were Jewish women from Hungary. He remembers it was Passover and the women gave him potatoes so that he would not have to eat bread. This camp was a subcamp of Buchenwald, and he was eventually taken back to the main camp.

In April 1945 Naftaly arrived at Flossenbürg and that same month was placed on a train toward Dachau. Naftaly says he was going to be murdered there because the Allies were closing in on the Germans. An American plane bombed the railroad tracks ahead of the train in Schwarzenfeld. After walking for three days, the prisoners were liberated by the Americans on April 23, 1945, at Neuenburg vorm Wald.

Naftaly was taken to Kloster Indersdorf. He was alone and never heard from his parents and brothers. In 1946 he decided with some friends to go to Palestine, where he remained until 1950. He then went to Austria; he wanted to return to Germany but did not make it. He tried to find out about his family and learned that those who were at the Sosnowiec ghetto were all taken to Auschwitz. That is where his family died.

After spending four years in Austria he moved to Brazil with a group of friends. He arrived in São Paulo in 1956. The next year he moved to Curitiba, in the state of Paraná, where he currently lives.