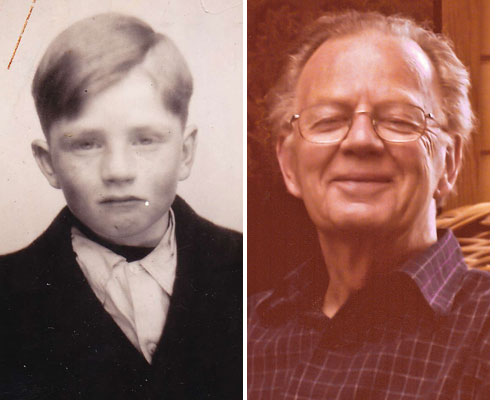 Nathan Kranowski was very surprised to see his photograph on the Remember Me? Website. He never expected to come across a photograph that he had not seen before and speculated that it had been taken after the war when he was nine or ten years old.

Nathan’s parents were Jewish immigrants from Poland. His mother and father were married in Paris in 1936, and Nathan was born there one year later. The Kranowski family lived in a small one-room apartment in a Jewish neighborhood near the Sacré-Cœur. Nathan's father, Wolf, had a sister Ryvka. Her son, Jacob Jacobowicz, is also featured on the Remember Me? site.

In August 1941, Nathan’s father was arrested in a French police street raid. He was taken to Drancy and remained incarcerated there for 11 months. On July 19, 1942, he was sent by train on Convoy 7 to Auschwitz and gassed there upon his arrival. The French police came for Nathan’s mother on July 23, 1942. She spent six days in Drancy and was deported to Auschwitz on Convoy 12. She was also murdered in Auschwitz upon arrival.

Nathan was an orphan at the age of four. His paternal aunt managed to place him in hiding with a Catholic peasant couple. He was given the alias Pierre and lived with the couple on their small farm in the French countryside. He remembers going to church on Sundays and being taught the catechism. He also remembers German soldiers periodically leaving cigarettes for the farm produce they confiscated.  He stayed with the Catholic couple for the duration of the war.

Nathan was reunited with his aunt after the war. She never talked about her wartime experience, but Nathan believes she was also in hiding. At some point after the war she was unable to care for him, and Nathan went to live in an orphanage. He remembers the imaginative games organized for the children there. Nathan returned to live with his aunt in Paris and attended school for the first time at eight or nine. He had learned to read during his time in hiding.

Nathan left France for the United States in 1948. His aunt took a train with him to the south of France and put him on a Polish ship, the SS Sobieski. He traveled the ten-day voyage alone and arrived in New York City on May 4, 1948. He lived with another paternal aunt, who had emigrated directly from Poland before the war. He attended primary school and learned English very quickly.

Nathan was naturalized at age 18. He graduated from Monroe High School in the Bronx in 1955 and went on to receive a B.A. from City College in French literature in 1959. Nathan continued to study and teach French literature, receiving a master’s from Middlebury College and a Ph.D. from Columbia University. He taught French at City College for two years and at Rutgers for eight. In 1970 he got a teaching position at Hollins College in Roanoke and taught there for four years. He then went back to school for a master’s in accounting at Virginia Tech. After graduating and getting CPA certified, Nathan accepted a teaching job at Radford University. He taught there for 25 years and retired in 2002.

Nathan speaks about his Holocaust experience several times a year to schools, churches, and other groups. In fact, a middle school teacher he knew from a talk he gave at Blacksburg Middle School in Virginia alerted Nathan to the photograph on the Remember Me? site. Nathan thinks that Remember Me? is a great project and may lead to people finding their relatives.