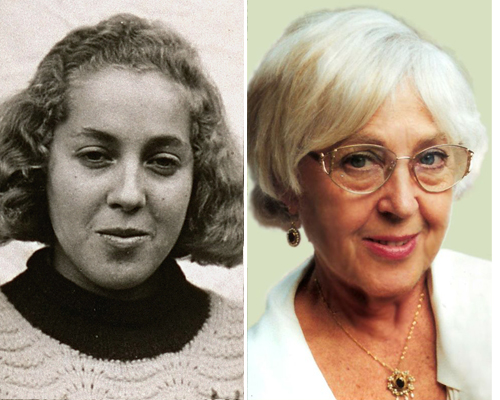 Nobody in Nina Krieger's family knew about her past. Nobody suspected what she had witnessed during her childhood. To her family and friends in Italy, she was a beautiful woman—with the added exotic appeal of being a foreigner—who had a passion for music and a taste for elegant clothes.

It was only when she was in her sixties that a news item in the Italian newspapers brought back her past and convinced her to share her story. Nina's children knew then, among other things, that she was Jewish and that she had lost her family in the Holocaust.

In 1987 a press release from TASS, the Soviet press agency, revealed that thousands of Italian soldiers had been killed by the German Army in Lwów after Italy signed the armistice in September 1943. News of the massacres had been heard earlier, but not until 1987 did the Italian Parliament create a commission to investigate the fate of these soldiers who had, until then, been officially considered missing.

When Nina heard about the commission, she said she wanted to testify. She had been in Lwów then, and she remembered hearing about the massacres. She also remembered the dress she was wearing when she first heard about them: a light dress with flowers, a summer dress. This was an interesting point for the investigation, as it suggested that the massacre had taken place before September, when the armistice was signed. Although the date and circumstances of the massacre could never be proven, this episode helped Nina and her family start a journey to recover and share her past.

Nina was born in January 1932 in Lwów, then a city in Poland (since 1945, it has been in Ukraine). Nina was the youngest child of Shlomo Kieger and Gittel Biling. She had three older sisters, Rachel, Dwora and Rozia, and a brother, Rafael. Both Shlomo and Gittel had children from previous marriages. Shlomo's son, Abraham, survived Auschwitz and moved to Israel. Gittel's older daughter emigrated to Canada before the war, and from there she has helped Nina's family put together pieces of her history by sharing memories and family pictures.Rachel, the eldest daughter of Shlomo and Gittel, was in Israel when the war brokeout and never returned to Poland.

Gittel died of pneumonia in 1934, and Shlomo hired a governess to take care of the children. Her name was probably Sarah, and she stayed as a mother to the children.

When the war broke out, Russia occupied Lwów, following the Molotov-Ribbentrop Pact. Conditions during the first two years of the war were certainly hard; however, Nina remembered that under the Russian occupation, her family did not feel as if they were in danger. Her father was a textile trader. They lived in a comfortable house, and their economic positionwould probably see them through the harshness of the war. It was when Germany betrayed the pact and attacked Russia that life changed for Nina and for the Jewish community.

Between July 1941 and July 1944, Lwów was occupied by the Germans. Exploiting the rivalry between the Ukrainian population and the Russians, the Germans made the Jews into scapegoats for the Bolshevik revolution, and the first pogroms occurred. Shlomo Krieger was probably killed during the first wave of violence in 1941, when Ukrainians targeted the most influential men of Lwów. Nina, her siblings, and Sarah were transferred to the ghetto, which had been established in November 1941. Nina’s memories were vague, but one moment stood out: she remembered how her family had been taken from the ghetto, boarded on trucks, and driven to a wood where, she recalled, they used to have picnics before the war changed their lives. There, the soldiers made them march in line. She recalled the moment she let her brother's hand go and hid in a bush, where she spent the night. What happened to her family—what she saw—she never told.

Nina's family does not know how she survived on her own in Lwów. She gave only details of a few scattered memories: the Italian soldiers that offered her a dish of spaghetti, the days she spent in prison after a Ukrainian neighbor betrayed her, and the German doctor that let her go because of her blond hair and blue eyes. For a while, nuns provided her refuge in their convent, where she was baptized and hidden.

After the war, Nina eventually reached Kloster Indersdorf, where a displaced persons’ (DP) camp for children had been established. Unable to find any membersof her family, the United Nations Relief and Rehabilitation Administration (UNHRRA) arranged for her transfer to the United States; after a few months’ stay at the Regensburg DP camp, Nina boarded the USS Perchon August 22, 1946, and sailed for New York. A foster family from Cleveland hosted her, but after Nina left, she did not keep in touch with them. At 25 she decided to move to New York to study music. Beautiful, and with a gift for music, Nina wanted to become a singer. At a New Year’s Eve party in New York, she met an Italian chemistry student, Avito Monaci. It was as if Nina's life started there, with a young Italian man wearing red suspenders who invited her to dance. Two years later, in Italy, she married him.

Avito had always respected and protected Nina’s desire to keep silent about her past, and her children knew nothing about her childhood in Lwów. When Nina decided to tell her story, it was Giorgia, her granddaughter, who insisted on knowing as many details as possible. Giorgia helped Nina reconnect with her sister Rachel in Israel and with the Canadian branch of the family. A family friend told Nina's story in Carlo Figari’s Il Mistero dell'Armata Fantasma, a book about the massacre of the Italian soldiers in Lwów.

Nina passed away in November 2013 after a long illness; her husband, Avito, died a few months later. They are survived by three children and five grandchildren.